I swear, the weirdest thing going last week was the Tea Party debate hosted by Ted Turner's brainchild gone wild.  (When I heard that the once-venerable CNN was going to give free air-time and thus a large dose of credibility to yet another crazy bunch hell-bent on taking back every single right and privilege afforded us by hundreds of years worth of struggle by our more forward-thinking ancestors, this is what I said out loud:  "Waaaaaahhhhhtt??"  (Most people I know uttered a variation of WTF??? but it was all I could muster.  Trying to save an ungrateful country is exhausting.) 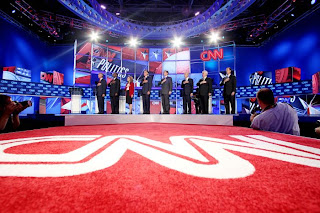 I admit I went into a deep funk over it for a while.  I did.  I sent out dozens of 140-character Tweets that were nothing more than pathetic variations of "Waaaaahhhhhtt??" (or WTF, if you lean that way.)

But then I read Bob Cesca's HuffPo piece on it and I had to laugh a little.  I especially liked this part:


I'm not sure if CNN knows it, but nearly everyone across the political spectrum thought the CNN presentation of the debate was ridiculously self-satirical -- a laughing stock only rivaled by the Fox News debate several weeks ago. It's almost as if the producers and planners were deliberately attempting to air something that Jon Stewart would definitely mutilate the following night (he did).

(Worth the read, too, for what he says after this:  "Whether it's print or broadcast news, the press is the only industry specifically named in the Bill of Rights, preserving for history the founding mandate that the press remain independent and unconstrained as a means of checking government power. Consequently, an unrivaled degree of integrity is required to fulfill that mandate.")

Then, only yesterday, I came across this post by Andy Borowitz, called "Rabid Dog Briefly Mistaken for Tea Party Candidate".  I laughed until the tears came, and it was just the lift I needed until I crashed again, remembering how hysterical I got at the crazy notion of someone like George W. Bush becoming president of anything. 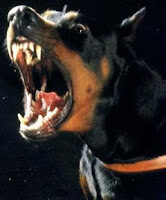 Beware of Granddaughters with access to YouTube:  OMG, Bruce and Esther, I HAVE to do this!
(Warning:  Do not watch this while eating or drinking.  Cover your keyboard and any other sensitive electronic components within spitting distance.  Okay.  NOW.)

(Note:  If  you read this you'll find they're okay with it.  They were shocked at first, but you just know they're having fun with it now.)

I love this story.  When Hurricane Irene washed out mountain roads in rural Vermont, teachers were shocked when kids from the far side of the mountain got off the bus as if it were just another day.  It happened like this: 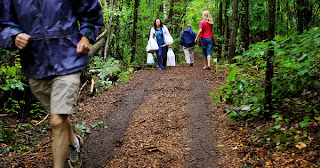 When Vermont roads were washed out by Hurricane Irene,33 schoolkids made it to school from the other side of the mountain.  Their families had discovered a half-mile-long forest path that they could walk, from Route 4 across the mountain to their school bus. At first, the woods were still and unsettling. “My hands shaked a little bit,” said Jillian Bradley, a second grader.
But as Sophia Hussack, another second grader said, “Since Vermont got hit by the storm, people think we couldn’t, but we do.” And what townspeople do and have done is a thing to behold: they have taken that quiet trail and in two weeks’ time turned it into the I-95 of wooded paths. More than a 1,000 people a day now walk it to get to their jobs and go food shopping on the other side. So many cars line Helvi Hill, the dirt road leading to the path on this side, that handwritten no parking signs have been posted to make sure the road stays passable.


I love to get a glimpse of the places where writers write.  I never get tired of picturing them sitting in their spaces doing what they do.  Plush or sparse?  Window or no window?  Hard or soft chair?  Tablet, typewriter or new-fangled electronics?  Chatchkes or no?  Over in Buckinghamshire, they're trying to preserve Roald Dahl's hut. It's a good, good thing.

Those Magic Moments:  Mysterious paper sculptures are appearing in libraries in Edinburgh, Scotland.  The gorgeous works of paper art were produced by cutting up old books (which, okay, gives me the shivers) and were then placed on library desks without anyone being the wiser.  Notes of thanks accompany them, giving the libraries credit for creating an environment where books are treasures and reading is a gift.  What a loving thought. 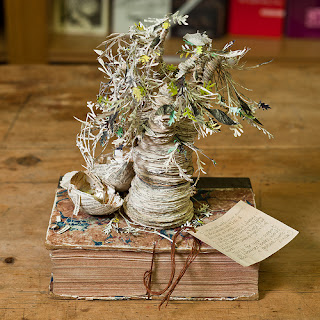 (Thanks to my daughter, Sue, for sending this to me.  I surely would have missed it.)