The Religious Test is Alive and Kicking in American Politics. Again.

As a non-religious person I have faith that religion will always be with us.  It's the way of the world, and if I'm baffled by its constancy, by its influence, by the sheer numbers of people involved, I'm even more befuddled watching the move away from any pretense at goodness and mercy in favor of a peculiar form of public political bullying by the Religious Right.

There are many churches that do good works and act as sanctuaries in a cold, cruel world.  Their congregations are loving and generous and, by the way, have no problem accepting non-believers like me. We work well together.  There is that understanding that, while our goals are the same; the paths we take to get there take a different turn.

I've hesitated to get into this, mainly because I have family and friends who are religious and I love those people.  Most of them have enough respect for me to lay off any proselytizing, but I know that a number of them can't help but pray for my damaged soul.  I'm good at pretending that's okay.  They mean well.

But what's not okay is what brings me to this:  Rick Perry.  His phony piety, his bad acting, his destructive actions as governor of Texas showing him for the hypocrite he is.  It should have been Michele Bachmann's lame and lazy preaching that capped it, but Rick Perry has finally done it for me.  His performance at Jerry Falwell's Liberty University was as loathsome as Jimmy Swaggart sobbing open-mouthed on close-up for forgiveness or Jim Bakker weeping at the loss of his empire.  Rank insincerity is what bonds them all.  The significant difference is that, so far, Jimmy and Jim haven't aspired to be president of these United States.


I listen to the calls to Jesus by Presidential candidates like Rick Perry, Michele Bachmann, Mitt Romney, Jon Huntsman, and even Ron Paul.  I see our presidents and members of congress fighting to one-up their Jesus-is-my-lord-and-savior status, and it's clear that  scrupulous avoidance of religious tests for political candidates is a thing of the past.

An avowed Atheist has never had a chance -- a fact that makes no sense in a democracy -- but even a quiet Christian wouldn't have a chance today.  If you're thinking of running for anything, you had better be out there professing your undying love of an accepted and specific God as defined by the one and only Holy Bible or forget about any future in 21st Century American politics.

This new century of ours is a puzzler.  It's suffering the worst kind of growing pains, but it's not as if it came from nowhere.  It's roots are in several centuries of ups and downs and lessons ripe for learning, yet it's as if American history is some quaint, nostalgic throwback having almost nothing to do with this modern world. 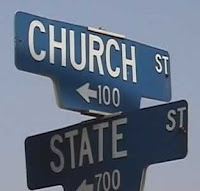 There are reasons for the need to see ourselves as a nation and not just as a country.  We're peopled with citizens as diverse as the world.  The fervent bleating of the more vocal Christian politicos cannot change the fact that not all Americans are Christians. We are not a Christian nation.  We never set out to be a Christian nation.  By clear Constitutional design,  there is no religious test for any candidate in this country.

If they can't get that one simple fact straight, one wonders what hope there is for understanding issues even more complicated.  Like the meaning of "Of the people, by the people, for the people", for starters.