WARNING:  Hot graven images ahead.  Turn back if you believe Jesus' image on toast should remain a miracle and not be used as a promotion by clever, sacrilegious Vermonters for a Made in China toaster.  (It's International Blasphemy Rights Day today, but I swear I didn't know that when I chose this segment.  Not that I'm not okay with it.  I am.)

As serendipity would have it, I was thinking about making myself a piece of toast in my conventional Fire Engine Red toaster last week when I happened to glance at my newest Twitter followers and saw that "Virgin Mary Toasters" was following me.  I was about to write them off because, really, @VirginMaryToast? Why me, faGodsake?

But I bit.  I clicked.  And now I'm crazy about Vermonters Galen and Owen (AKA Virgin Mary Toasters) and their website, Burnt Impressions, Inc. They have a growing line of actual toasters that entertain with pictures, but the Rapture Toaster is my so-far all-time favorite.  (Not yet for sale.  Must be a prototype): 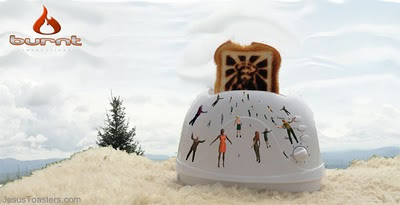 In Honor of Older Persons Day, October 1 (and because I'm one of them, now entering my fourth year of septuagenarian bliss) I would like to take this time to remind the (relatively) young that we're not all out there playing Bingo or whining about gas or sitting on icebergs waiting to die.

Remember the inimitable Maggie Kuhn and The Gray Panthers?  She and a small group of retired friends organized the tiny grass-roots organization, using word-play on "The Black Panthers" to suggest an aggressiveness that probably wasn't really there, first to protest the Viet Nam war, and later to protest social and economic inequities.  They're still out there doing their thing, making my heart glad, but now they've got more friends and allies.


Now we have The Raging Grannies, with chapters all over the country and all over the world. They joined the Wall Street protesters last week when members of the Canadian-based Grannies for Peace (Not be be confused with the Granny Peace Brigade) were pepper-sprayed and arrested.

Amongst those detained were two members of New York's Grannies for Peace. Both ladies are in their 70s and they were amongst the younger people, handcuffed and corralled, into orange mesh pens, in the street. The Raging Grannies saw their friends and decided it was time to show their support too.

"We have helluva job on our hands," said 96 year old Lillian Pollak, [Raging Grannies member] as she arrived in Zuccotti Park to join the Occupy Wall Street protesters camped out there. "We thank you. This is wonderful. I was getting down in the dumps about what was going on, but you have raised my spirits."

Note:  We Senior Citizens also have another day, called "Senior Citizens Day", that falls on August 21.  That one was signed into remembrance by Ronald Reagan, the guy who started that whole Kill Social Security thing, from the party that hates Medicare, so I'm still a little wary about that one.  Plus, I hate that phrase, "Senior Citizen" and besides that, all Reagan expected on that day was for people to be nice to their elders.  I would say it's a start, but it wasn't.  His party is still trying to kill us off early.(Reminds me of deer hunters who rave over the beauty of the animal but lust after its blood.  Very odd.)
Cartoon of the Week: