Friday Follies: On Kardashian, Condi, Lust, Larceny and Love in the Air

How jealous are we of that lavish, over-the-top Royal Wedding the Brits got to celebrate this year?  So pathetically jealous we had to pretend we're capable of having one of our own by latching onto the lavish, over-the-top Kim Kardashian-Kris Humphries wedding. (Whoever the hell they are.) The Big Event took place last weekend and every station in the nation went all barmy over it.  The name "Kardashian" was out there so often, I figure it's just a matter of time before it appears in dictionaries all over the world as another striking example of "full of sound and fury, signifying nothing"


[Celebrity] is but a walking shadow, a poor player
That struts and frets his hour upon the stage
And then is heard no more. It is a tale
Told by an idiot, full of sound and fury
Signifying nothing." — With apologies to Macbeth


But my favorite part was a moment just before the nuptials when a CNN reporter was outside the compound talking about things most shallow and decidedly icky, like the fact that People Magazine paid more than a million dollars for the exclusive rights to the wedding photos, and a kid (looking and behaving like a certain grandson)finds a spot behind the reporter, within camera view, and gets all goofy, dancing around, making silly faces.  As if he knew this was a farce, a Kardashian money-maker, a temporary interlude (the marriage lasted all of 72 days), shuttered once the publicity died down.  (I had a great video clip of the kid but it has disappeared and I haven't been able to find it again.  Too bad.)


Love Story #2:  Moammar loves Condi. Who knew?  The Libyan Rebels have taken over Gadhafi's (Kaddafi.  Khadafy. Qaddafi. etc.) .compound and of course the first thing they did was to dig through the junk to find the juicy stuff.  Imagine their joy when they found a photo album entirely devoted to portraits of Condoleeza Rice.

One might guess from the evidence that Moammar had a certain obsession with Condi, but all guessing ends with the heretofore ignored interview the smitten one gave to al Jazeera way back in 2007, in which he gushed:


"I support my darling black African woman [...]  I admire and am very proud of the way she leans back and gives orders to the Arab leaders. ... Leezza, Leezza, Leezza. ... I love her very much. I admire her, and I'm proud of her, because she's a black woman of African origin."

Newlyweds Arthur Phillips and Brittany Lurch wanted very much to have a nice reception where their many friends could join them in celebrating their nuptials.  Money was apparently tight (neither of them were Kardashians, you see) so it took the Centre Hall, PA couple a few days to figure out how they were going to do it, but when the plan finally took shape it was a doozy.

They headed to the local Wegmans and loaded up a cart with over $1,000 worth of reception-type food and then walked out the door without paying.  Brilliant.  It worked!  The problem was, they had invited so many people to their special soiree one cart-load of hors d'oeuvres just wasn't going to do it.  They had to go back and load up again.  They were so tickled over the success of their first heist, they ordered a huge batch of seafood from the deli.  But something felt amiss, apparently, because they left the deli counter without the goods and tried to get outside, landing smack into the arms of the police.

They will be spending their honeymoon in jail.  No immediate plans for an actual marriage. 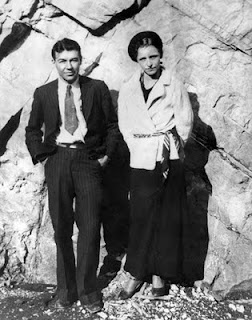 (That's Bonnie and Clyde.  Click here for Arthur and Brittany's wedding portrait.  The Centre Daily wants me to pay for the photo but I don't want to.)


That moment sublime:  The flying scene from "Out of Africa".  Pure romance:


Cartoon of the Week