". . .There is something that I must say to my people, who stand on the warm threshold which leads into the palace of justice: In the process of gaining our rightful place, we must not be guilty of wrongful deeds. Let us not seek to satisfy our thirst for freedom by drinking from the cup of bitterness and hatred. We must forever conduct our struggle on the high plane of dignity and discipline. We must not allow our creative protest to degenerate into physical violence. Again and again, we must rise to the majestic heights of meeting physical force with soul force.
The marvelous new militancy which has engulfed the Negro community must not lead us to a distrust of all white people, for many of our white brothers, as evidenced by their presence here today, have come to realize that their destiny is tied up with our destiny. And they have come to realize that their freedom is inextricably bound to our freedom.
We cannot walk alone." 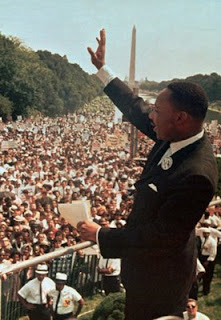 Here it is, the morning after the heralded Glenn Beck "Restoring Honor" rally, held on the steps of the Lincoln Memorial inches away from the exact spot where Martin Luther King delivered his "I have a Dream" speech exactly 47 years ago. (Beck claimed it was "coincidence" that his speech was delivered then and there, but we know Beck so we know better.)

So the crowds came and the numbers were relatively "vast", and we're in a tizzy because it just shouldn't be.  It's Glenn Beck in charge and he's a mean one, and there's fear of a sullying or a misremembering or a watering-down of MLK's glorious words.

Fear not, oh, please.  Crowds are what we have with Glenn Beck but resonance is what we cherish with the Rev. Martin Luther King.  When we quote entire phrases from Dr. King, even now, after nearly a half-century, we're uplifted by their goodness and reminded of his courage and his deeds.  He brought us around to his way of thinking at a time when there was still so much resistance to the notion of racial equality.  We look back now (most of us who lived through it) and wonder how we could have been so blinded for so long, until true leaders--good men and women willing to lay down their lives for the kind of justice that should have been theirs all along--spoke to us in words and actions we could finally understand.

This is what Glenn Beck wants his flock to believe he's doing now.   Yesterday's Beck put on his religious cloak and preached goodness and mercy and a back-to-God  message that might have brought tears to our eyes, had we not known about the Beck-Before-Yesterday.

That is the Beck he's going to have to live down if we're to believe anything he said at the MLK "I Have A Dream" site. Glenn Beck's history is neither as a peaceful organizer nor as a man of God.  He's not even a man of the people.  He is a man of the person, an island unto himself.  This is his show, his shtick, and tomorrow the matinee will have changed and on the screen will be Glenn Beck, the actor, in yet another role designed to keep his paying audience riveted and agitated.

It's possible that he'll like this role so much he'll do an encore and we'll see him in MLK makeup for a while longer, but Beck is Beck and not that good at the kind of discipline that would require him to maintain the persona.

He is smart enough, however, to know his own people.  They're not peacemakers, either, and they won't tolerate this for long.  It's all an act, it's all a game, and they're playing because they think there's something in it for them.  Their goal is to destroy the "others" (that's us) and "take back" the country (our country--all of ours).

Glenn Beck and Sarah Palin stood on the steps of the Lincoln Memorial and spoke to a huge crowd of their followers.  That was the significance of yesterday.  The significance of MLK's "I have a dream" speech 47 years ago to the day is that we still remember it and we still honor the man who gave it.  We still believe in the America he dreamed about, and we still understand our roles in preserving it.

Glenn Beck tried to dilute that message yesterday and he failed.