The Holiness of Burning, Burning Hate


The city of Gainesville has denied Dove World Outreach Center’s application for a burn permit to set fire to copies of the Quran on Sept. 11, but the church plans to burn the holy books anyway.
The Gainesville Sun, 8/18/10

So let me get this straight:  A "church" called Dove World Outreach Center, 50 members strong,  followers by their own admission of the Christian bible, reaches out to another faith by threatening to burn their sacred book.  Is that the way it looks to you, too?

Dove World calls itself a "New Testament" church, but quotes lavishly from--surprise!--Leviticus and Deuteronomy.  Their calling--given to them by God, according to them--is to denounce both the Quran and Homosexuality.  It's a big job but they're a feisty bunch.  No sitting on their hands in that "church".  They have signs: 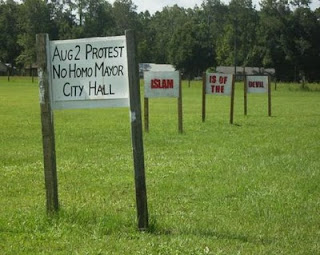 They have tee shirts:

They have FaceBook:   (Sorry, couldn't stay.  My hair can only stand on end for so long.)


But their website is where it's at:  In a blog titled "No Homo Mayor Protest",  Fran Ingram seems to want to make the  rant about those "homosexual sinners", but inexplicably cites a quote from Exodus first:  Exodus 20:14 (New International Version)14 "You shall not commit adultery"

Then she goes on to cite Leviticus 20:10-17 as proof that homosexuality is a sin.  There is, yes,  mention of men with men in one of those eight verses, but there's a whole lot of killing required for men and women together, for all kinds of abominations, including adultery.  Death to adulterers!  (Which may explain that measly Dove World Outreach Center membership of only fifty.)

The seeming head blogger, Fran Ingram, wrote another blog called "Ten Reasons to Burn a Koran".  It explains all.

Reason #1:  The Koran teaches that Jesus Christ, the Crucified, Risen Son of God, King of Kings and Lord of Lords was NOT the Son of God, nor was he crucified (a well documented historical fact that ONLY Islam denies).  (!!)

#3:  The Koran's teaching includes Arabian idolatry, paganism, rites and rituals.  (Depends on what you mean by "paganism".  As for idolatry, rites and rituals--We kneel, we stand, we chant, we cross our hearts, we sprinkle water on heads of young and old alike, we hang Christ on a Crucifix in our living rooms and over our beds, we touch the hem of Virgin Mary statues, we devote entire catalogs to Christian lucky charms. . .)

#4:  The earliest writings that are known to exist about the Prophet Mohammad were recorded 120 years after his death. All of the Islamic writings (the Koran and the Hadith, the biographies, the traditions and histories) are confused, contradictory and inconsistent. Maybe Mohammad never existed. We have no conclusive account about what he said or did.  (Oh, boy.  See #2 above.  Or better yet, read the Christian bible.)

#5:  Mohammad's life and message cannot be respected. The first Meccan period of his leadership seems to have been religiously motivated and a search for the truth. But in the second Medina period he was "corrupted by power and worldly ambitions."  (Uh huh.  Hmmm.  Sounds a lot like Jerry Falwell, Pat Robertson, Jimmy Swaggart, Paul Crouch, Ted Haggard, Jim and Tammy, George Rekers and a whole lot of supposed "Christian leaders".  Of course, they aren't deities.  At least not to the rest of us.)

#6:  Islamic Law is totalitarian in nature. There is no separation of church and state. It is irrational. It is supposedly immutable and cannot be changed. It must be accepted without criticism.  (Sounds like a Christian Right wet dream.)

#7:  Islam is not compatible with democracy and human rights. The notion of a moral individual capable of making decisions and taking responsibility for them does not exist in Islam. The attitude towards women in Islam as inferior possessions of men has led to countless cases of mistreatment and abuse for which Moslem men receive little or no punishment, and in many cases are encouraged to commit such acts, and are even praised for them. This is a direct fruit of the teachings of the Koran.  (So the Koran is based on Leviticus and Deuteronomy? And this is a bad thing?)

#8:  A Muslim does not have the right to change his religion. Apostasy is punishable by death.  (That death thing is pretty harsh (a big thing in Leviticus and Deuteronomy, by the way.)  Burning in Hell for non-believers is pretty harsh, too.  But how does the bible feel about liars?)

#10:  Islam is a weapon of Arab imperialism and Islamic colonialism. Wherever Islam has or gains political power, Christians, Jews and all non-Moslems receive persecution, discrimination, are forced to convert. There are massacres and churches, synagogues, temples and other places of worship are destroyed.   ("The Qur'an states: '...There is no compulsion in religion. The right direction is here forth distinct from error...”[2:256]
In the light of the above verse, a person has to be insane to belief that Islam prescribes execution for apostasy.
The Qur'an further states:
' Say (Muhammad it is) truth from Lord of all. Whosoever will, let him believe, and whosoever will, LET him disbelieve.' [18:29]
In no uncertain terms, Allah commands Prophet to allow people to believe and disbelieve. If the Shariah recommends to kill an apostate, this law cannot be Islamic because it contradicts the above two verses."

Okay. ..so now let's have a look at Deuteronomy 7:1:  “When the Lord your God brings you into the land that you are entering to take possession of it, and clears away many nations before you, the Hittites, the Girgashites, the Amorites, the Canaanites, the Perizzites, the Hivites, and the Jebusites, seven nations more numerous and mightier than yourselves, 2 and when the Lord your God gives them over to you, and you defeat them, then you must devote them to complete destruction. [1] You shall make no covenant with them and show no mercy to them. 3 You shall not intermarry with them, giving your daughters to their sons or taking their daughters for your sons, 4 for they would turn away your sons from following me, to serve other gods. Then the anger of the Lord would be kindled against you, and he would destroy you quickly. 5 But thus shall you deal with them: you shall break down their altars and dash in pieces their pillars and chop down their Asherim and burn their carved images with fire."

So out of those 10 reasons there are NO reasons for burning the Quran.  But that won't stop them, any more than a plea for common sense will stop them from attacking "homos".  They are on a mission to avenge their version of God, and common sense is a big, fat loser.

But wait. . .happily, there's more:  Apparently their God is no match for the city, the bank and the insurance company.

An email to the Dove World Outreach Center flock:


RBC Bank calls in mortgage – BUT WE WILL STILL BURN KORANS


Cottons All-Lines cancels insurance – BUT WE WILL STILL BURN KORANS


We will proceed with the Koran Burning Event, Saturday 9/11, 6-9pm, as planned.


RBC Bank called in our mortgage with a limited time to pay it off. Now Cottons All-lines Insurance has also cancelled our commercial insurance on our property putting our mortgage in immediate default. We need to raise the $140,000 to pay off the RBC loan immediately.

Oh my God.  Could it GET any better?  Yes, it could.  The IRS could take one look at that web page and decide that using the words "God" and "King of Kings" and "Lord of Lords" doesn't make them a church.  (Dove World was accused in 2009 of selling used furniture for profit on eBay, using volunteer help from church members, including Dove World Academy students, who are not allowed outside contact even for weddings and funerals.  I'm looking for the outcome.  Haven't found it yet.  Dove World leader Terry Jones says he does pay taxes on TS Company, their eBay furniture company, but won't say how much.  Read the linked article above for the full story.)

The only time any of the phony "churches" believe in separation of church and state is when they can get around having to pay taxes. A "church" only has to prove 51% usage in order to get full tax exemption.  Pretty good, huh?  That means they can claim outside profits of up to 49% of their income and still not have to pay taxes.

The unfortunate truth is that God's hate pays way more than God's love.  Wonder if there's a bible quote for that.