"As if there is not enough that has gone tragically wrong in this era of endless warfare, the military is facing an epidemic of suicides. In the year that ended Sept. 30, 2009, 160 active duty soldiers took their own lives — a record for the Army. The Marines set their own tragic record in 2009 with 52 suicides. And this past June, another record was set — 32 military suicides in just one month. War is a meat grinder for service members and their families. It grinds people up without mercy, killing them and inflicting the worst kinds of wounds imaginable, physical and psychological . . . [a]nd the multiple deployments (four, five and six tours in the war zones) have jacked up stress levels to the point where many just can’t take it. "  Bob Herbert, The Lunatic's Manual, NYT  August 2, 2010


I'm thinking now of three men I've known whose lives were changed dramatically by war.  Their injuries weren't as much to blood and bones and sinew as they were to the heart and mind.  They were each in their own way shell-shocked. 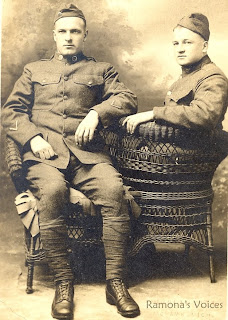 My Great-uncle Leonard, quiet and dignified even as a young man, I'm told, fought in the First World War.  He came back silent and withdrawn and by his own words, not fit for society.  He had lost so much weight people in his hometown didn't recognize him.  His sister-in-law told me he could be seen at all hours walking and walking and walking.  His beard grew long, his clothes grew tattered, and after a while people stopped seeing him altogether.
He told me later, when he was in his late 80s and still robust, that he had to go into the wilderness to heal himself.  He built a rude cabin deep in the woods and lived there for three or four years, coming into town only for provisions, getting out again, quickly, stealthily.

He spent his time hunting and fishing, following a daily regimen of grueling calisthenics to strengthen his body, and studying the habits of the deer and other wildlife living with him in the surrounding forest.  A simple life that no doubt also included a coming-to-terms with what he had seen and done on the battlefield.  Events which he never talked about, and would only describe some 60 years later as "terrible".

My grandmother's step-son sustained some leg injuries and was shell-shocked during World War II.  He walked with a wobble but his major wounds were psychic and so deeply embedded he never got over them.  He came back with a monthly government disability pension that usually lasted no more than a week.  Alcohol was his solace, and his barmates were his closest friends--until the money ran out.  He was called "Rubberlegs" by nearly everyone, including the kids.  When my grandmother heard us say it, she called us in and told us what had happened to him.  "They never should have taken him," she said. "They should have seen that Wesley's soul was too kind for war."

My cousin's Uncle Bill was a soldier in World War II, as were two of his older brothers.  I remember how handsome he was, looking to me just like Dennis Morgan, the movie star.  As a silly teenager I had an enormous crush on him and found any excuse to be near him.  After the war, he was staying with my aunt and uncle for a while, and one day I found him sitting alone in the living room.  He had his head down, his hands covering his brow and I thought he had drifted off to sleep.  Then I saw his shoulders shaking and realized he was crying.  I backed out and went to tell my aunt.  "It's the war," she said.  "It won't let him forget it."

His two brothers made the adjustment back to civilian life without any outward signs of trouble, even though they had both been in fierce battles on the European front, but Bill had been a medic at the Battle of the Bulge.  The images of bodies and body parts would not go away.  He was a lost soul for many years, drowning his memories in a sea of alcohol.

We train our children at an early age to be considerate of other peoples' bodies and feelings.  We do not hit.  We do not call names.  We do not cause deliberate harm to humans or animals.  And then we take those still malleable young people and send them to war, expecting them not just to forget societal rules but to completely turn those rules on their asses and do the exact opposite.

Once inside the base gates they're taught that there is honor in war, even though the ultimate goal is to kill.    We use fancy terms like "collateral damage" to define the innocents who get caught in the crossfire.   It takes a strong will or a dulled mind to pretend those innocents, young and old, are unworthy human beings.   It's enough to cause any conscious mind to crash.

A while back, George Carlin put his own take on the emotional casualties of war and the euphemisms we choose to slot them:


There's a condition in combat. Most people know about it. It's when a fighting person's nervous system has been stressed to it's absolute peak and maximum. Can't take anymore input. The nervous system has either (click) snapped or is about to snap.

In the first world war, that condition was called Shell Shock. Simple, honest, direct language. Two syllables, Shell Shock. Almost sounds like the guns themselves. That was seventy years ago.

Then a whole generation went by and the second world war came along and very same combat condition was called Battle Fatigue. Four syllables now. Takes a little longer to say. Doesn't seem to hurt as much. Fatigue is a nicer word than shock. Shell Shock! Battle Fatigue.

Then we had the war in Korea, 1950. Madison avenue was riding high by that time, and the very same combat condition was called Operational Exhaustion. Hey, we're up to eight syllables now! And the humanity has been squeezed completely out of the phrase. It's totally sterile now. Operational exhaustion. Sounds like something that might happen to your car.

Then of course, came the war in Viet Nam, which has only been over for about sixteen or seventeen years, and thanks to the lies and deceits surrounding that war, I guess it's no surprise that the very same condition was called Post-Traumatic Stress Disorder. Still eight syllables, but we've added a hyphen! And the pain is completely buried under jargon. Post-Traumatic Stress Disorder.

I'll bet you if we'd of still been calling it Shell Shock, some of those Viet Nam veterans might have gotten the attention they needed at the time. I'll betcha. I'll betcha."


And I'll bet if we had a no-escape draft open to the sons and daughters of rich and poor alike, wars (if there were any) would be short and to the point.  Then we might not have to resort to euphemisms in order to get around the fact that as evolved human beings we're no longer built for war.