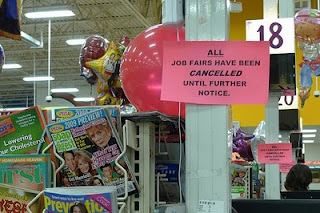 Austin, Texas 2009 - Timothy J. Silverman photo
Here's another sign of the times:  Job Fairs are going out of business.  In January the Myrtle Beach Area Hospitality Association canceled its annual Jobs Expo, scheduled for this month, because, apparently, nobody needs a Job Fair anymore to draw in workers.  They're out there banging down the doors already, so why pay a booth rental to pull in people?  That's what 70% of last year's Expo participants decided this year.
Myrtle Beach unemployment numbers in December were a frightening 15%, up from 12% the year before, so one of the fears (besides not having any Expo booth takers) according to the Expo planner, was a stampede.   "What we didn't want to do is host a job expo and get the hopes up of thousands of job seekers and then not have jobs for them."  Yes.  That would be bad.
Other job fair planners are thinking the same thing.  The job fair booth rental market is in trouble.
Last April a Glenwood, Colorado job fair had to be canceled when the "five to seven" employers who had initially signed up decided they could probably find workers on their own.
Last June a job fair in Marietta, Georgia was canceled for lack of jobs.

Last May, a newly built shopping center in Dedham, Massachusetts canceled a job fair over fears that 10,000 people might show up for about 1500 jobs.

But Monday in Somerville, Massachusetts, the U. S. Census Bureau  held a job fair.  They're predicting  they'll be hiring 1,000 workers with pay ranging from $16.50 to $23.50 an hour, 20 to 40 hours per week.  That's terrific, even if it is short-term.  The census, conducted every 10 years since 1790, will be employing over one million people to make sure the numbers are as accurate as we can get them.   A million people who didn't have jobs will be working for a few weeks to a few months, thanks to the system we've established to count the people who live in our country.  Pretty cool, huh?

The 2010 census form is shorter than in many other years.  Just ten questions per household member, none of them particularly invasive or personal.  Standard census questions.  The census measures population numbers and trends:  who lives where and how many live there.  The numbers decide the number of representatives from each state.  Money comes to the states because of census numbers.  It's the census. You know?

So why did I get an email that read, in huge red letters,  "Good luck to any census taker that [sic] comes to my house after watching this"?     The email links to a YouTube presentation by "Emmy-winning producer" and Ron Paul supporter Jerry Day telling me what I can expect from those underhanded liars hired by the Census Bureau. who are out to get private info from me by trying to violate my rights.  It's the damn gov'mint out to get us again.

Another website, "MyTwoCensus" is watching the Census Bureau like a hawk, ready to swoop down any time it looks like they're spending taxpayer money unwisely.   They've got a few things wrong so far, like coming up with a story, "The Salvation Army vs. The Census Bureau",  about how the SA is not going to let those census workers through their doors!.  Seems it's not quite like that.  Their directive clearly says they understand how important the 2010 census is--to them and to everybody--and then they outline how it will be done in order to comply.  (They have a problem with an auxiliary census designed to give info to business interests, but not the general census.)

MyTwoCensus asked one question that, in their minds, the Census Bureau didn't answer correctly:
Can you please confirm or deny that most 2010 Census jobs will last 1-3 weeks as opposed to 6 weeks-8 months?  (which has been stated by elected officials…)  (Some of the commenters answered the question pretty well.)

It could be that the admins at MyTwoCensus are doing something worthwhile, but their nitpicking is the kind of thing that the Jerry Days--growing more ubiquitous by the minute--latch onto to try and convince us that the damned gov'mint is going rogue.

My point here is that we have a census every ten years.  It should come as no surprise to anyone that questions must be asked, nor that mistakes will be made.  That's the nature of the beast.  Something will go wrong somewhere.  But the census is a valuable tool and life would be much harder without it--possibly even for those who think their precious liberties are being taken away by the required answering of a mere ten questions.

There's also this:  So far it hasn't been privatized.  That has to stick in the craw of the business interests behind much of the gov'mint bashing.  It's not theirs for the taking.  It's a government program run by the government.  Gaahh!  They HATE that!

That a million people will get to work for a few weeks or months can't be ignored.  It's a good thing.  And, let's face it--it's more than the private sector is offering at the moment.

Virginia's governor, Mark Warner, maybe not aware of what happens at job fairs these days, promoted a federal job fair at the Mary Washington University campus on Monday.  Before it even began they were warning people that it might be crowded.  Well, yeah! 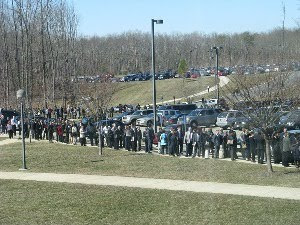 STAFFORD, Va. (AP) - A federal job fair at the Stafford campus of the University of Mary Washington has backed up traffic as thousands of jobseekers flocked to the event.
Sponsored by U.S. Sen. Mark Warner, the job fair had attracted nearly 4,000 people by noon Monday and job seekers who were not already at the site were advised to turn back. A spokesman for Warner said the event had reached capacity and people already there were facing long waits.
The Stafford Sheriff's Office has deputies on the scene helping with crowd control and traffic.

So then, as if it isn't hard enough already, we have people like Jim Bunning, Tom Delay and John Kyl, who look and talk like clueless blockheads, but--make no mistake--every word out of their mouths is calculated to undermine any attempt by the current people in power to recognize the jobless situation for what it is:  an unmitigated, long-term disaster (brought along nicely by many of the people from the Bunning, Delay and Kyl camps, in case they'd have us forget).

Former House Majority Leader Tom Delay called Sen. Jim Bunning (R-Ky.) "brave" on Sunday (March 7) for launching a one-man filibuster of unemployment benefits, arguing that they dissuaded people from going out and finding work.
Appearing on CNN's "State of the Union," the Texas Republican said that Bunning's fiscal responsibility was commendable, even if his shenanigans (refusing to allow unemployment benefits to be considered by unanimous consent) nearly brought the Senate to a halt.
"Nothing would have happened if the Democrats had just paid for [the benefits]," Delay said. "People would have gotten their unemployment compensation. I think Bunning was brave in standing up there and taking it on by himself."
Asked whether it was bad strategy to make a budget stand on a $10 billion extension of unemployment (as opposed to, say, the Bush's $720 billion prescription drug package), Delay insisted that if the PR had been done right, Bunning would have been applauded. Helping the unemployed with federal assistance, he said, was unsound policy.
"You know," Delay said, "there is an argument to be made that these extensions, the unemployment benefits keeps people from going and finding jobs. In fact there are some studies that have been done that show people stay on unemployment compensation and they don't look for a job until two or three weeks before they know the benefits are going to run out."

Last week, Jon Kyl, senator from Arizona, picked up the momentum and argued on the floor that unemployment benefits keep people from looking for jobs "because people are being paid even though they're not working."   Unemployment insurance "doesn't create new jobs. In fact, if anything, continuing to pay people unemployment compensation is a disincentive for them to seek new work."

Let me suggest first off that Sen. Kyl might want to rethink what he said there.  "People are being paid even though they're not working," he said.  While not working.  For the people.

How many jobless people took in what those baboons were saying?  What does it take to get those jobless, demoralized folks mad as hell?  I know it's a struggle just to get through the day for millions of people these days, but, damn!  Enough is enough.  They're thumbing their noses at us, spitting in our faces, and, in the case of Tom Delay, grinning like Jack Nicholson in "The shining" while he's thumbing and spitting.

And why does the media care what the disgraced politician Tom Delay thinks, anyway?  I'll tell you why.  It's the goofy grin behind the words.  It's the jeering words behind the grin.  It's all about the entertainment.