At some point, we have to decide as a country that we just can’t have this: We can’t allow ourselves to remain silent as foaming-at-the-mouth protesters scream the vilest of epithets at members of Congress — epithets that The Times will not allow me to repeat here.
It is 2010, which means it is way past time for decent Americans to rise up against this kind of garbage, to fight it aggressively wherever it appears. And it is time for every American of good will to hold the Republican Party accountable for its role in tolerating, shielding and encouraging foul, mean-spirited and bigoted behavior in its ranks and among its strongest supporters.

Honestly, unless you've been monitoring the ticking time bomb that is the far-right media in recent days, you probably don't appreciate how frighteningly possible that cultish scenario has become, as the GOP Noise Machine, led by Fox News, publicly suffers a nervous breakdown. It's a mental and emotional collapse that's been advertised in recent days as cablers, radio talkers, and right-wing bloggers have reached for increasingly hysterical, often blood-curdling rhetoric to describe the irreversible atrocity -- an incurable, metastasizing malignancy!! -- that's about to seize and destroy the United States in the form of a bill to expand health care coverage.

Okay, I'm getting scared now.  I've been a political junkie ever since Adlai Stevenson lost to Ike for the second time in a row.  I wasn't even old enough to vote, but I cried my eyes out as much as if I'd been watching my best friend go down for the count.  I've followed politics all my adult life, sometimes rabidly, sometimes just out of the corner of my eye, but I can safely say I have never seen anything like this monumental 15-month temper tantrum egged on and cheered on by the Republican party and, yes, the mainstream media.

Are the crazies really in the majority?  Are they so powerful these days that what we're seeing--the vicious, frothing attacks on care for the poor and the sick, on blacks, on gays, on disabled protesters, on 11-year-old grieving kids--is now the American norm?

From the coverage bombarding us, it would seem that way.  The rabid crazies are being fed their favorite dish--publicity--and, gluttons that they are, they're eating it up and going after more.  They understand how it works--in order to get more they have to give more, which means that each time they're out there in front of the cameras they have to step up the action.  More hate!  More fear!  Louder!  Louder!

This is what the media have never understood--their complicity in all of this.  They're feeding these monsters, goading them, energizing them, when the way to starve them out of existence is to simply ignore their cries for more.

Where are the signs of support for real reform in this country?  Nowhere to be seen.  The SEIU (Service Employees International Union), on their Labor's Lens page, highlights numerous demonstrations, protests and vigils by union members and supporters.  I had to go to their pages to find them. I didn't see them anywhere else. 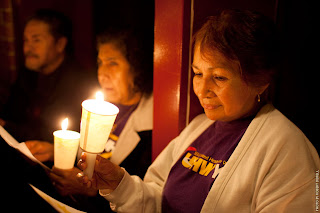 As I write this, President Obama is signing into law the beginnings of health care reform.  With our help, he'll be able to strengthen it and give it some real teeth.  Our patience is at the limit because the need is so urgent, but there is urgency in putting our support behind our leaders now.  It's the only way to counter the factions so desperate to take down this president they're willing to destroy any chance for millions of Americans to receive adequate health care.

If we're ever going to bring our vision of America back, we have to vanquish those who are standing in the way of repairing and nurturing our country.  We have the power to do that by exposing them for what they are.  They do not represent our America--not now, now ever.