The faculty of attention has utterly vanished from the Anglo-Saxon mind, extinguished at its source by the big bayadère of journalism, of the newspaper and the picture magazine which keeps screaming, "Look at me." Illustrations, loud simplifications... bill poster advertising - only these stand a chance. ~Henry James

This is the front page of the Washington Post this morning: 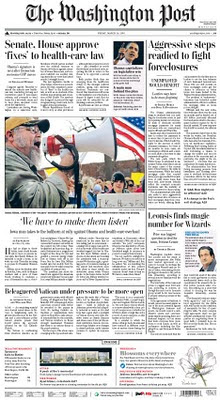 Small President Obama, BIG teapartier, on the morning after an event of historic proportions--an event pulled off IN SPITE of the tea partiers, not because of them, and yet the tea party guy gets center stage. (Don't look, Mrs. Graham.  It's not a pretty sight.)
The online link to the teapartier story has a lovely photo gallery on those nice people and the efforts they go through in order to make their voices heard:
http://www.washingtonpost.com/wp-dyn/content/article/2010/03/25/AR2010032503849.html?sub=AR

I'm all for public dissent.  I wish we would have seen more of it during the Bush years.  I wish we would have seen ANY of it during the Reagan years.  But for the Washington Post to relegate the president's picture to a small square at the top of the page after an historic achievement in order to highlight the dissenters who are off to join the crazies is tabloid journalism at best and reckless anointing of the fringe elements at worst.

WaPo staff writer Eli Saslow followed a man named Randy Millam as he prepared his protest sign on his kitchen table and drove his "muddy Ford Fusion 50 miles across the cornfields" to Iowa City, where President Obama was scheduled to speak.  Two years before, Millam lost his job as an assembly-line worker at Kraft Foods, and he was angry.

"Millam's resolve Thursday was reinforced by the sense that he was taking part in a movement -- a rising tide of anger, fear and vitriol in the wake of the health-care overhaul signed into law by Obama this week. Millam joined a chorus of discontent surrounding the president's visit: a warm-up protest Wednesday night, a greeting party of protesters waiting at the airport and hundreds more with plans to chant outside the downtown arena while Obama spoke. In the hours before he left for Iowa City, Millam watched reports on Fox News Channel about vandalism at Democratic offices and visited a Web site of the conservative "tea party" movement, where he was inspired by a Thomas Jefferson quote about how bloodshed might be necessary to protect a country from tyranny.

"I'm not ready for outright violence yet. We have to be civil for as long as we can," Millam said. But, he added, "we are watching the infrastructure of this country crumble under our feet. The government doesn't want to hear us. We have to make them listen."

Mr. Saslow apparently never got around to asking Mr. Millam how exactly he would go about "making them listen". When you're writing a feel-good story you want your readers to feel good. The jolly Mr. Millam is just a'jawin' when he mentions the Jefferson quote (The tree of liberty must be refreshed from time to time with the blood of patriots and tyrants). It's all in fun.

"'The president just about declared war against the American people last weekend,' [Millam] said. And it is a war Millam intends to fight."

Hey, Eli!  Did you even read your own piece?  The guy is giving you signals, and you're not picking up.   His anger over not having a job is legit.  Boy, can we all relate. (Those Bush years were doozies.)  But by giving him and his buddies everyman status, heroes of the people, out to right a wrong by any means necessary, you've given them license to do damage.

Where was the other side in that article?   Here:

"By now a group of about 200 Obama supporters had stopped to watch and listen, congregating across the street from the protesters. Seven police officers stood in the middle of the road, monitoring both sides. On one sidewalk: Obama T-shirts, health-care-reform advocates, and students from the University of Iowa, one of whom held a sign inviting Obama to join him at a local bar for Thursday night's $1 you-call-it drink special."

"Finally, one student walked across. He wore dark sunglasses and carried a poster-board sign, made moments earlier. It read: "These People are Idiots." He stood with the protesters, his sign mocking them, while he listened to an iPod."

Memo to WaPo Front Page editor:   You missed the big news.  The big news is that American health care just took a baby step toward actual reform.  You might be bored with it, it's been going on for so long, but trust me, the millions without adequate health care can't get enough of it.