Our government... teaches the whole people by its example. If the government becomes the lawbreaker, it breeds contempt for law; it invites every man to become a law unto himself; it invites anarchy.
Louis D. Brandeis 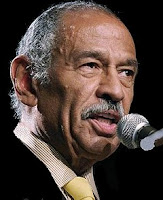 As politicians go, John Conyers is a good man. And, as with so many good people who work passionately toward a more just world, he's had his share of hostile enemies. His ongoing quest for answers about the Bush Administration's murky and undoubtedly illegal maneuverings has earned him a special place in the hearts and minds of that loyal corps of screwballs who still work at protecting Bush's legacy. They'd like to see him six feet under. But he's not going anywhere. He's on a mission, and there are bastions of citizen bloggers who are cheering him on.

I don't know how I missed "Why We Have to Look Back", the column he wrote in the Washington Post last week. I just caught up with it this morning, thanks to those bloggers, and again I have to wonder why something this important hasn't been talked about by the TV pundits, who spent so much time jawing about Rod Blagojevich's hair, the First Lady's dress designers, and Caroline Kennedy's unfortunate over-use of "You know. . .".

Conyers was announcing the release of a 486-page report entitled "Reining in the Imperial Presidency", detailing the many legitimate instances of legal and ethical abuses by the Bush Administration. The report offered these immediate and important suggestions for remedies:

"First, Congress should continue to pursue its document requests and subpoenas that were stonewalled under President Bush. Doing so will make clear that no executive can forever hide its misdeeds from the public.

Second, Congress should create an independent blue-ribbon panel or similar body to investigate a host of previously unreviewable activities of the Bush administration, including its detention, interrogation and surveillance programs. Only by chronicling and confronting the past in a comprehensive, bipartisan fashion can we reclaim our moral authority and establish a credible path forward to meet the complex challenges of a post-Sept. 11 world.

Third, the new administration should conduct an independent criminal probe into whether any laws were broken in connection with these activities. Just this week, in the pages of this newspaper, a Guantanamo Bay official acknowledged that a suspect there had been "tortured" -- her exact word -- in apparent violation of the law. The law is the law, and, if criminal conduct occurred, those responsible -- particularly those who ordered and approved the violations -- must be held accountable."

Such reasonable observations. How could anybody deny their worth? He ended the piece this way: 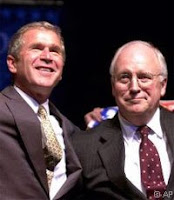 "Some day, there is bound to be another national security crisis in America. A future president will face the same fear and uncertainty that we did after Sept. 11, 2001, and will feel the same temptation to believe that the ends justify the means -- temptation that drew our nation over to the "dark side" under the leadership of President Bush and Vice President Cheney. If those temptations are to be resisted -- if we are to face new threats in a manner that keeps faith with our values and strengthens rather than diminishes our authority around the world -- we must fully learn the lessons of our recent past."

I don't doubt that a future president will face fear and uncertainty if another 9/11 happens in this country. I differ with the good congressman that the belief that the ends justify the means would draw a future leader to the dark side. From the day George W. Bush gave up on becoming baseball commissioner and ran for president instead; from the day Dick Cheney chose himself as GWB's running mate, those two inhabitants of the dark side burrowed even deeper into their holes. The horrific events of 9/11 gave them the leverage they needed to draw the rest of us into their lair, and damned if they didn't succeed at the worst hornswoggling this country has ever seen. 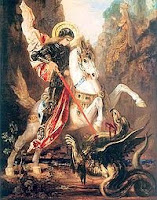 Now we're all coming into the light again and we find ourselves so dirty, so poor, so exhausted from eight years on the dark side, all we want is a good, hot meal and a siesta in the sun.

But somebody has to go back in and get the bad guys--even if those bad guys are of our own making. I can't do it alone and neither can you, but if Conyers the Dragon Slayer says he can, what fool would stand in his way?