Toward a More Perfect Musicale

What a lot of blab about nothing. Please, no more about Yo Yo and company hoodwinking the American public on Inauguration Day. You want to talk about hoodwinking? Let's talk about the last eight years 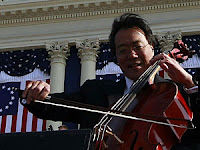 Here's how I felt as I watched master artists Yo Yo Ma, Itzhak Perlman, Anthony McGill, and Gabriela Montero perform"Air and Simple Gifts," by the great John Williams: It couldn't be more perfect.

Here's how I felt when I heard that these true, flawless musicians weren't performing live, but had actually pre-recorded it in a studio the day before: So what? All the better. I wouldn't have wanted to miss a single note wafting away in the wind. I wouldn't have wanted my mood shaken for even one tiny second by an off-note. Those things stay with me.

Which is why, when I thought about it some more (And how could I help it, with all that flack?) I came to this: Oh, how I wish the great Aretha had done the same thing.

When I heard that Aretha Franklin was going to sing "My Country Tis of Thee" at the ceremonies, I conjured up a vision of the glorious Marian Anderson singing the same song in front of the Lincoln Memorial at Eleanor Roosevelt's behest after the snooty DAR shunned her. Then I thought of the remarkable Mahalia Jackson (because I wanted Mahalia to be there), and finally, I could hear in my head Aretha's stunning performance of "Nessun Dorma" , when she took over, on twenty minutes notice, for an ailing Luciano Pavarotti.

And at her first words, I closed my eyes and sighed. Ah, Aretha, my hometown girl, you've done it again. But then it came. . .

I'm not going to be harsh here, because I love that woman, but I challenge anyone to tell me truthfully that that was one of Aretha's finest moments. It was not, and even Aretha had to know it. Yes, surely, it came from the heart, but on that day of perfect beginnings, was that enough? Think how much more powerful that piece would have been if Aretha had been able to work it out in a recording studio instead of fighting a losing battle against the wind and cold. There's something to be said for do-overs.

(Would that Barack Obama and John Roberts had rehearsed a little and opted out of doing that oath thing live. Talk about your sour notes. I'm going to be remembering that one, too.)
Posted by Ramona Grigg at 9:07:00 AM