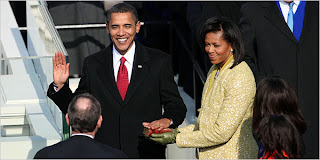 Obama swearing in - New York Times photo
Today is January 20, 2009. Inauguration day for Barack Obama, and it can't have come soon enough. It's true that he's been defacto president since November, 2008, when George W. Bush unofficially, without fanfare or hesitation, turned the job over to him, but today it became official. What a day it's been! They're estimating the crowds at 2 million strong, a sight unseen on any Presidential First Day in modern history.

Obama's speech, so anticipated by us all, was anticlimactic and, at first hearing, a bit of a disappointment. It didn't soar. It didn't sing. The soundbites were few and far between. But, as I think about it now, I realize that what he was going for was resonance. I don't remember the words, but I feel the feeling. What he said was that we're in trouble, we'll need to work hard to get out of it, and if we'll do all that we can do, so will he. He told the world that we were back to being honest and sincere and that they could trust us again. He told those who would want to harm us to back off. But most importantly, he told the Fat Cats that their glory days are over. As I said, resonance.

Update: Obama has just gotten out of the first car in the motorcade, and the non-stop screaming has escalated to unhealthy decibels. I am not the only one who wishes he would just stay in the car. Not that I don't want to see him outside, smiling and waving--looking, not surprisingly, presidential. I just don't want anything to happen to him. The secret service men look nervous and that's not a good sign. I'll be glad when they get to the viewing stand, where they'll be safe.

It's 4:30 PM and the parade is running very late. It's beginning to get dark and we're still at the motorcade. No sign of the bands yet. It's about 30 degrees in DC, with a wind chill making it 10 degrees colder. Michelle isn't dressed nearly warm enough, but she's smiling and waving as though it were a summer day. They've been in and out of the car a couple of times now. It's just too cold, but I understand Obama's sense of duty. Millions of citizens are lining the route and he feels obliged to acknowledge them. I want to remind him of what happened to William Henry Harrison, our short-lived ninth president, who died of pneumonia a month after standing in the snow, giving the longest inaugural speech ever.

But I mentioned two beginnings in the title. That's because this is also the day that I'm launching this blog. I've been thinking about it for a long time, and even had a couple of false starts, but I chose this day to finally take the hard step after hearing Barack Obama's call to duty.

The past eight years have been worse than any nightmare scenario the horrormeisters could have come up with. Through it all, I hid behind screen names, railing against Bush and his cohorts, zinging my zingers and feeling good about it. The zingers, that is. There was nothing else to feel good about. No matter what we did, Bush was going to be Bush, Cheney was going to be Cheney, and the world as we knew it was going to be out of our control.

I have no grand illusions about a rapid return to health for this country, just as I have no illusions about the impact my words will make in the overall scheme of things. I'll admit that I'm overwhelm

ed right now with the events of the day. I'm feeling more than a little inarticulate and possibly even shy about expressing how it feels to have our country back. It may not be the best day to start a blog after all.

But start it I have, and now I'll give this day over to the Inauguration of Barack Hussein Obama, America's new president. The bands are playing, the sun is setting and all's right with the world. For now.