It has come to this: I can no longer call myself a writer. Trump has broken me down. I'm a basket case trying to follow the illogical, the stupid, the crazy, the nonsensical, the sheer volume of lies and strutting and demagoging and denying and. . .

I can't do it. I can't. For months now I've been reduced to 280 character bleatings on Twitter--when I'm not annoying my friends and family all to hell with my spitting and sputtering and useless hollering, trying to explain how I'm FEELING throughout all of this.

You want to know how I'm feeling? (I know you didn't ask and you're just here because you saw that title and you're curious, but this is about ME now. Okay? And yes, I used ellipses separated by spaces in that first paragraph. Stop the damn judging!)

Well get in line, because I don't know how I'm feeling and until I do, anything I write here is gibberish, likely to change as the seconds change on that clock on the wall mocking me for wasting so much time trying to make sense of feelings when any feelings of a powerless old liberal woman are laughable in this new America whizzing along, leaving me so far behind I might as well be a speck on the horizon, a dust mote, a dot at the end of a sentence nobody wants to read.

Did that sound like I'm feeling sorry for myself?  Damn right I am. When I started this thing 10 years ago I thought you people would listen to me. I thought if I put words into somewhat complete sentences that didn't always suck at punctuation and grammar you would pay attention. I thought I had something to say.

I did have something to say but it turns out Donald Trump was elected anyway. I was on the side that lost the battle and I hate that. Anything I've written since then has been in protest to Donald Trump. A total waste of time. He's still president, and I'm still sitting here wondering where I went wrong. Why couldn't I make a difference?  Was it something I said? Or didn't say?

So now you're thinking, who the hell does she think she is? Nobody could make a difference. Not Eugene Robinson, not Sarah Kendzior, Not Steve Schmidt, not Robert Reich, not Elizabeth Warren, not Hillary Clinton, not Bernie Sanders, not Rachel Maddow, not any of those other people whose names escape me right now, since I'm in the throes of a PTSD flare-up. Fill in the blanks. There were literally hundreds of voices out there warning against a Trump presidency, using the American language for all it's worth--smart, elegant, forceful, jeering, demanding, begging. Using facts as cudgels, as swords, as bright beams of light--all for nothing.

Now we're in the midst of a government shutdown, in effect for over a month, and real people are in real pain, trying to stay safe while the monster is still at large, still out there breathing fire, still creating such chaos nobody knows what to do.

And that's the least of what's happened over the past two years. They tore kids from their parents' arms and put them in cages. They "lost" some of them. They're sending people back to countries where their deaths are inevitable. We're on the verge of forgetting that. That's how bad things are.

It's as if we're at that point in a horror novel where the village is under attack and everybody is still at the hand-wringing stage. They're all yelling, getting out their torches and pitchforks, but nobody has a real plan.

He's out there breathing fire and nobody has a plan.

Because they've never seen anything like it and they didn't prepare for this. And on top of everything else, they have to fight those few crazy citizens who think the monster is a good guy and everyone else is over-reacting.

If this were fiction, this is where it would start to get interesting. 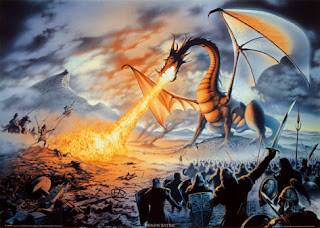 So okay, that's it then. Gotta go. I'm scaring myself again. And besides that, I'm not a writer anymore.


(Cross-posted at Medium, where you can clap as many times as you want. So please clap. Thank you.)