I'm sick to death of having to see, hear, and worry about Donald Trump.  I'm sick of having to wonder how we got here, living in a country where a ludicrous, ignorant madman is in power, where the party in power is turning a blind eye, and where midterm elections are only days away and we're still not sure the good guys will win.

We're living through times so crazy we couldn't even imagine them three short years ago. We were different people before Trump crashed through seemingly impenetrable barriers to get to the White House. We were nicer. Now even the best of us have become loud-mouthed name-callers. We use F-bombs and C-words as safety valves. We look to settle arguments by twisting knives in already gaping wounds. We work hard at it, to the point of neglecting real issues. 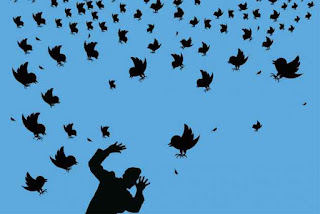 We spend hours on Facebook and Twitter savoring the need to turn the air blue. We can't get through the day without using CAPS and exclamations (!!!!!!), posting links and memes intended to satisfy our rage--as if that's even possible.

We gladly follow people whose strength lies in clever insults, expressing the kind of vitriol we say we're working against. When they insult fellow followers who dare to disagree with them we give them a pass, hoping against hope we never say anything they might take wrong. (You know who you are, Twitter denizens.)

I don't want that anymore. I don't want to do it anymore. (Because, yes, I have.) I want to be among people who fight for decency by being civil. I want to go back to being strong without being cruel. There's enough cruelty out there without it stinking up my own circles.

On both Facebook and Twitter, I'm dropping or blocking people who use rage as their only tool. I don't want to be around them anymore. Rage is contagious, it's exhausting, it's meaningless in the long run.

Rage is a catalyst. It's never a solution.

I'm not going to drop either Facebook or Twitter. Wouldn't think of it. In times when we need more than smoke signals to get to the truth, both sites become useful war rooms.

But I'm tired of fighting the good fight through muck and mire. Starting today, I'm looking for civil warriors. No name-callers, no body-shamers, no sniffy moralists with axes to grind.