Why it Means Something When De Niro Says it

You could spend many wasteful hours going back through at least 30 years of my public utterances--blogs, essays, articles, comments--but you'll never find an F-bomb in any of them. That's not me. It's not my most hated word--that would be the C-word--but it's right up there.

I shake my head a lot, signalling uninvited disgust at the thousands of times I see it on Twitter, on Facebook, in blogs, in real life. I don't get how "F--- you!!!" adds to any argument, other than making the user feel mighty, mighty good. It's used so much it's lost whatever luster it might have had.  As slings and arrows, they're even kind of laughable.

But last night at the Tony Awards Robert De Niro dropped the F bomb--twice--against Donald Trump, and I, an audience of one in my own living room, found myself cheering like a maniac. 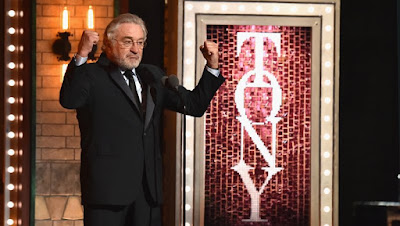 So what's the difference? The difference, as I see it, is in context, power, and visibility.

Context: Trump had just come off of a lunkheaded one-man burlesque at the G7 Summit held in Canada. At the meeting where leaders from the top industrialized countries gather to work on equitable alliances,Trump's dual roles as chaos creator and spoiled brat became clearer with every word and deed.  The Ugliest American embarrassed us once again, and put us in a far weaker position world-wide than any president had ever done before.

Trump is headed today for talks with the North Koreans. It's a clown show, with Dennis Rodman as the frontman. Trump will know in seconds whether or not it's going to work, because "It's what I doooo." The two dictators will have a private 45-minute sit-down, again unprecedented, the need for secrecy way too suspicious.

Then there's that whole flap about refugee kids in cages, literally torn from their parents' arms, all in the name of "new and tougher immigration policy". The program is so rotten the UN's Human Rights Commission felt compelled to condemn the United States of America for "arbitrary and unlawful separation of family life...a serious violation of  the rights of a child".

Power: Robert De Niro is a world-famous actor known for his no-bullshit take on our politics. Every one of us would have been surprised if he had taken the stage and said nothing. He did what he came for, and he did in New York City, where businessman Trump is and always has been a pariah. De Niro did it in front of an audience of creative mavericks there to celebrate the freedom to dream, to endure, to interpret the human condition. Trump--no surprise--is the antithesis of all they hold sacred.

Visibility: De Niro got a standing ovation. How awful if he hadn't, coming off of that powerful performance by the still-grieving students from Parkland--those same students now working to bring the NRA to its senses before more children are killed, and getting ugly heat, even from members of Trump's administration. The optics were inescapable: De Niro could have been every furious parent, every furious student, every furious human being capable of horror at the violence perpetrated on us all.

The ceremonies are broadcast all around the world. Millions of people saw De Niro pump his fists and say those words, and, for everyone who sniffed "blasphemy", claiming, bizarrely, that it could only help Trump, there were countless others who did as I did--cheered the hell out of it. Pumped! We were pumped.

And that, my friends, is a Big Effing Deal.