The President is a Damned Nuisance. We Get it. Can we Move On?


It's been over a year now, and the squatter in the White House, that odd, clunky, rich guy who said of the presidency, "How hard could it be?"; that sleazy showman who, early on, saw merit in making fun of people whose only sin was in disagreeing with him (Congress, judges, the FBI, the press, TV pundits, Gold Star parents, Heads of State, heads of social programs...you name it); that ignorant, irresponsible do-nothing who promised jobs where there weren't any, who boasted he would fix whatever ailed the country single-handedly, all by himself, because nobody on EARTH--no politician, no scientist, no scholar--was smarter than he was... 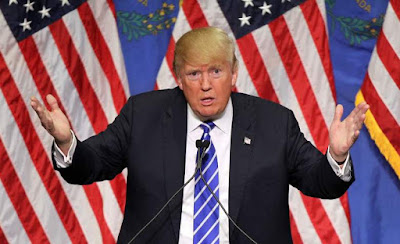 That guy is still there.

If we haven't had enough of him, shame on us. We're supposed to be the adults here, yet we let this increasingly silly Peter Pan (I don't wanna grow up) dominate our every breathing moment.  Seconds after witnessing that hilariously awful image of an imperious Donald Trump descending on his golden escalator, we should have known the only response to such a spectacle would have been a collective, "Yeah, get outta here, ya big galoot".

But, no. We ate it up. What chutzpah! How gutsy! It was like watching a second-rate horror show, a black comedy, a bizarre but highly entertaining version of the worst politician EVER.

Even now he revels in the absolute power of his naughtiness. He cannot be schooled, he cannot be humiliated, he cannot be convinced that he is not God. And why should he change? Nothing fazes him. He is obsessed with building a wall between the U.S and Mexico and nothing will move him away from it--not Mexico saying they won't pay for it, not the rest of us giving him grief over it, not Congress dodging with, "well, hold on now, let's think about this...".

He knows nothing of diasporas or despair, sees little value in aid and charity, has an uncommon fear of black and brown people--even those who do nothing more than kneel. He's a dream come true to White Supremacists and faux Christians; a recurring nightmare to our Dreamers.

A year in and he still doesn't understand why he--the Great and Powerful Oz--can't just snap his fingers and make it happen. No, he can't let the Vice President do all the work. No, he can't stop the presses when they publish unkind stuff about him. No, he can't fire a judge who happens to be Hispanic. No, he can't wring loyalty oaths out of the FBI. No, he can't cozy up to Russia. No, he can't use our nuclear weapons to annihilate North Korea...

And, boy, it pisses him off.

So just last week he accused Democrats who didn't stand and applaud his State of the Union speech of being unAmerican. Treasonous, even. How DARE they? And instead of the press questioning how it is that a President of the United States had never seen a State of the Union address before (else he would have known that's how the damned thing works--the opposition always sits it out), they glommed onto the treason comment and completely ignored his abominable ignorance of American politics.

And here's yesterday's Breaking News: Ever since Trump sat through France's Bastille Day extravaganza last July 14 he's been lusting after his own Tanks and Rockets and Stuff Like That parade, Soviet/North Korea style. He kids you not. He pictures it going right down Pennsylvania Avenue, looking something like this:

The Pentagon guys are madly trying to stall--red tape, lost memos, the logistics behind hauling our country's heavy weaponry to the steps of the White House--the usual--but Trump has spoken. It'll happen. Nobody will be able to talk him out of it. Thousands of man-hours and millions of dollars later, it'll happen. Because, you see, the president has tantrums.

We know all of this in dizzying detail because our media falls all over itself to suck in and blast out every word, every gesture, every twitterpated "How great am I?" brain fart emanating from this hopeless dunderhead who, through no fault of mine, managed to become, of all the crazy things, President of the United States.

Every week the majority of us watching this debacle say to ourselves, "Well, he's outdone himself this time. It can't get any worse." But it does. It does because Trump revels in this stuff. He wallows in attention-getting controversy. Chaos is his Ecstasy. He just can't quit it, and he won't as long as we go on satisfying his craving.

I'm as guilty as anyone, wasting heaps and heaps of time in shuddery fascination, but the bright new thing is that I've finally become bored with it. The President is getting repetitive and tiresome. His antics aren't hilarious or even mildly funny anymore. Nothing shocks me, and that's a bad sign for a showman.

If he can't entertain us, what good is he? That's the position he's in now. He's done nothing to show us he can be--or even wants to be--presidential, and it's clear, after a year without any real leadership, that we don't need him.

Our focus now must be on the Republican majority in Congress. When they're not enabling Trump, a man they know full well is woefully unqualified and has no business in the White House, they're defending his behavior. ("Nothing to see here, he was only kidding, that's not what he meant, he's what the voters want..."). No mystery there. They're hoping for enough time to undo the few things they weren't able to obstruct during the Obama administration; enough time to kill off any other long-term rules and regulations designed, obviously, to obliterate, or at least irritate, the super-rich.

Their unfettered freedom renders them reckless and giddy. (At last! Can't stop us now!) Trump's antics are distractions they're anxious to keep afloat. It's not Trump who bears watching, it's that bunch in the majority who see democracy as an obstacle to their real goals. We're on to them and they know it. The question now is, how much damage can they do between now and November? The answer comes in how watchful we are.

Let Trump be Trump, but without the bright lights and the fanfare. Get him off the stage. Curtain down. Spare us the second act.

(Cross-posted at Crooks and Liars)
Posted by Ramona Grigg at 7:06:00 PM