Another massacre. Another killing field. Yesterday, sixteen kids and one teacher at at Marjory Stoneman Douglas High School in Parkland, Florida were murdered by a teenager blasting away with a semi-automatic weapon. So today we're in mourning--crying, howling, ranting about the unfairness. How could this happen? Why is this happening? Something must be done!

The same old shit. Nothing happens. The families whose lives have been devastated by their losses have our sympathies and we do them the supreme honor of allowing them to weep on TV, or seating them in a prominent place beside politicians at public speeches, but we don't give them what they really want: A promise that it'll never happen again.

The unbelievable numbers of gun deaths in America are more than a national scandal, they're the product of mass insanity. I don't know how else to explain it. The statistics on American gun deaths are so outrageously skewed compared to other civilized nations, some of us (but obviously not all of us) work frantically to make it stop. We have no power beyond our words, and, even as we're blasting our thoughts into the vast Web we know words won't do it.

It goes on and it goes on because the leaders of this country are in thrall of the NRA and they allow it to go on. They're the only ones who can stop the rampages and they refuse to do it.

The words "I believe in the Second Amendment" are killer words, designed to give permission to any nutcase who needs an excuse to use a gun as a final solution .

When pundits or government leaders preface their rants against violent gun deaths with "I believe in the Second Amendment, but..." I stop listening. It's insane to say they believe in a corrupted version of a constitutional amendment deliberately misused and abused by the NRA, when they of all people should know better.

The NRA is nothing more than an industry promoting and selling deadly firearms, and they do it by seducing Americans into believing gun ownership is fun, cool, deliciously subversive, and an absolute goddamn right. 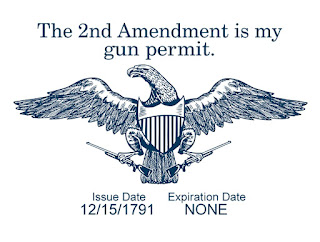 The NRA and their brothers-in-arms, the gun manufacturers, have built a multi-billion dollar industry off of that crazy talk and our own government has done everything in their power to encourage it. Gun lobbyists spend billions of dollars in Washington alone to keep that murderous myth going. The NRA "donated" hundreds of millions of dollars to Donald Trump's campaign. Many more millions went to dozens of members of Congress. Money over lives. They took blood money.


A well regulated Militia, being necessary to the security of a free state, the right of the people to keep and bear Arms, shall not be infringed.

I've written about the misuse of this amendment before--not that it does any good--but let me repeat: The second amendment does not say what the NRA or certain government leaders say it does. It was designed to give the states the right to build their own militias. Nothing more, nothing less.

(And, before you even go there, the Supreme Court's 2008 Second Amendment decision, District of Columbia vs. Heller, did not give a free pass to the country's big gunners.

This, from Antonin Scalia:


"It is not a right to keep and carry any weapon whatsoever in any manner whatsoever and for whatever purpose.

Nothing in our opinion should be taken to cast doubt on longstanding prohibitions on the possession of firearms by felons and the mentally ill, or laws forbidding the carrying of firearms in sensitive places such as schools and government buildings, or laws imposing conditions and qualifications on the commercial sale of arms.

We also recognize another important limitation on the right to keep and carry arms.  Miller (an earlier case) said, as we have explained, that the sorts of weapons protected were those 'in common use at the time'. We think that limitations is fairly supported by the historic tradition of prohibiting the carrying of 'dangerous and unusual weapons. ' "

In order to keep the deadly gun industry going, the profiteers want us to go on believing it's the phrase, "the right of the people", that protects gun owners from....

...from what? A rogue government itching to take away their guns and turn them into slaves? That's crazy talk. That's NRA-promoted crazy talk. That's the kind of simplistic drama you might expect from an apocalyptic movie of the "B" kind.

The killing has to stop and it won't stop until this government, right now, right this moment, decides along with us that it has to stop. They have the power. They can do this. And if they don't, the blood of our children, the next victims, is on them.

But one more thing: Whatever happened to the federal bump stock laws? Another promise broken, with more to come. A full 90 percent of the country wants background checks, and more than 50% want better gun control laws, but our government will not take on the NRA, a private but powerful group holding us hostage, whose sole purpose is to profit from the sale of guns

It's on our government to take this on.

Never let them forget, it's on them.

(Crossposted at Crooks and Liars)
Posted by Ramona Grigg at 8:30:00 AM