Today marks the anniversary of the Dread Fiend Trump's official entry into politics, not as dog catcher, not even as city clerk, but as President of these United States. 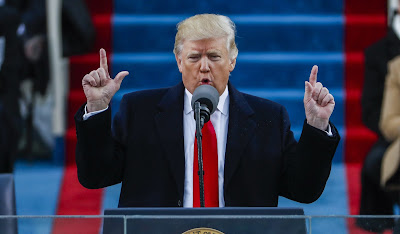 A year has passed and as much as we've spit and hollered, as often as we've watched the evidence of corruption pile up, Donald Trump is still president. He is every bit as bad at the job as we imagined. You might even say he's far worse. But on the bright side, North Korea hasn't nuked us yet, the Grand Canyon hasn't been filled in and paved over, and neither ermine robes nor jeweled crowns have replaced Polo shirts and MAGA caps.

Court jesters are filling the Capital and kowtowing is back in vogue but so far no guillotines have appeared in any town squares. Nevertheless, good people are being banished from the realm by the thousands--families torn apart, falsely accused of unworthiness--and countries that were once our friends now look on us with pity and/or disgust. Many of them can't stop laughing.

We're in a fine mess, with no rescue in sight. If there be heroes, they're mighty scarce and awfully damned quiet.

The Democrats, except for a gallant few, are performing their usual cowardly moves. They sit behind the barricades yelling and shaking their fists, but when it comes to doing battle--twisting arms and bloodying noses--they're outta there.

So here's a radical thought: Let the liberals do it. Give us a chance to show how it could be done.

Liberals, you say, are the classic political nerds, not worth bothering with unless it's to give us our daily wedgies or noogies. Quaint, naive little do-gooders lost in a world of ruthless cruelty without weapons adequate enough to bruise a flea. (That's what they said about Hobbits, too, you know.)

In the 1980s, around about the time the actor Ronald Reagan,friendly Midwestern liberal turned hard-hearted California conservative, was solidly in there as POTUS, the word went out that liberals--those ridiculous "for the people" gadflies--were ruining the country by helping too many undeserving, impoverished leeches, by insisting that workers be represented by hard-nosed unions, by tightening, enforcing, or inventing regulations that were or would be anathema to the gold-plated entities they targeted.

It wasn't hard to convince the many millions that health, wealth, and happiness could only come from a government without teeth, from the benevolence of ridiculously powerful corporations, and, if all else failed, from that venerable standby, Old Testament God.

All that stood in the way were those damned Liberals.

Liberals became such pariahs an entire bloc jumped ship and took on a new name: Progressives. (I would describe them for you here, but I admit I don't know the difference. I hear they're mainly friendly.)

But what we liberals have that others don't are hearts that gush blood whenever injustice rears it's massive, ugly head. We see a bleeding heart as a badge of honor. The same with tears. We cry when things move us, and we don't hide from our emotions. Our anger stems from compassion, our outrage roars at cruelty. We wear our hearts on our sleeves and we don't care.

We built the unions and gave workers a voice. We put an end to child labor. We fought to give every adult citizen the right to vote, no matter gender or color. We helped the poor and the elderly by creating Social Security, Medicare and Medicaid. We passed the Civil Rights Act, the Voting Rights Act, the Clean Air act, and the Clean Water Act. We ended a recession that nearly destroyed the middle class.

We did all that and more against the wishes--and the might--of fat cats and right wingers who sorely wanted what we're heading for today: a country ruled by non-contributing despots whose only interests are power, greed, and self-preservation.

We are not that country and we never will be. The Trump phenomenon is an anomaly, destined for the history books, a long chapter on how close we came to letting our democracy die.

We're still a majority of the good and, thankfully, most of us aren't ashamed to show it. It's our time now and there's much to do. They're out there waiting for us and they have heavy weapons. The obstacles are scary and formidable.

A personal note: Today also marks this blog's ninth anniversary. I wrote my first blog post on  January 20, 2009, on the afternoon of Barack Obama's first Inauguration, celebrating hope and sanity with a smidgen of skepticism. No miracles expected, none received.