Trump is Trump, But Who Are We? 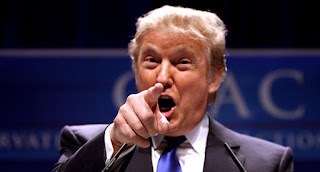 Nearly three weeks in and Donald Trump is still the president-elect. Never mind how we feel; it's how he feels that counts. Just ask him. He has remained the man he always was, and why not? Good God, the man loves who he is!  His adoration for himself is dazzling. The scope of his self-love is breathtaking. In his eyes he is a commanding figure, a smooth operator, just what the world has been waiting for--a man with a colossal brain, a dick to die for, and no double chin AT ALL!

But about the rest of us: For at least the next four years, if all goes as awry as we fear it will, Donald Trump and his partners in crime will be free to make foolish and dangerous decisions affecting every single one of us.  In order to stop them, or even to slow them down, we have to figure out who we are.  We're not the same people we were before all this.  We've been rocked to our core.

Are we bitter?  Damn right.  Are we weak?  Weakened, maybe. Are we strong? As strong as we were a few weeks ago, when we thought our strength, our mission, our remarkably good sense, would put an end to this Trump guy and all he stands for.

We were wrong. It hurts. It's awful. But we're at a place now where we can't afford to make foolish mistakes. We're divided. We've splintered into factions.  We're still muttering over how this happened and who was to blame, and we're inclined to blame each other.  We're going to have to get over that.

Still, there is no question the Democrats made some terrible blunders.  We're still hashing out what all they were, but the biggest blunder was in not addressing the real, everyday needs of the lower and middle classes.  The very people who were waiting for signs that help is on the way. It was easy to go after Trump. Every day brought something new and even more outrageous. But the needs of the people took a back seat to every shocking disclosure, until every speech, every TV ad, began to sound the same. Trump is bad. He's soooo bad. Let us count the ways. . .

It's done now, and we can either go on blaming or we can recognize that the presidency of Donald J. Trump will be anything but normal. He is and always will be a spiteful, foul-mouthed, reckless egotist--a verifiable loose cannon--only now he'll have the backing of an equally reckless GOP leadership and the aid of a cadre of dangerous characters with shady pasts and presents.

Instead of advancing our causes, we'll be fighting to keep them from disappearing entirely.  We know going in it won't be a fair fight, so the first thing we need to do is to abandon all wishful thinking. It's exactly what it appears to be.

Donald Trump will never anything but an embarrassing, privileged low-life who will spend the next four years disrespecting the office of the president and irritating the hell out of us in the process.

He'll be up at all hours tweeting silly, snotty stuff in order to draw a snarl or a laugh.  He'll be the first president in history to be accused of blatant overuse of exclamation points. 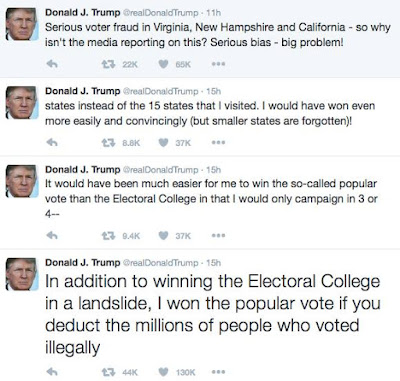 And that's just in his off-hours.  God knows what he'll do when he gets down to business.

So the second thing we need to do is to shake hands and make a pact:  As crazy as it's going to get, we have to be the sane ones. We're the good guys.  No matter how hard they work to beat us down, we're the good guys. And, even knowing the honor the presidency should bring, Trump will always be Trump.

As Charles Blow wrote in his column gone viral, "No, Trump, We Can't Get Along":

You are a fraud and a charlatan. Yes, you will be president, but you will not get any breaks just because one branch of your forked tongue is silver.

I am not easily duped by dopes.

I have not only an ethical and professional duty to call out how obscene your very existence is at the top of American government; I have a moral obligation to do so.