America, What Have You Done? 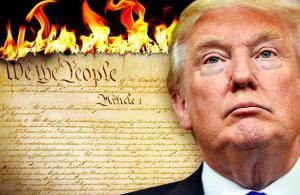 Last night, against all odds, against everything that's holy, Donald Trump was elected president of the United States.  A vile, cruel man who flaunts his fame and fortune, who exacts revenge in the form of name-calling and slander, a man who has a history of lying, cheating, and ruthlessly attempting to destroy anyone who goes against him, will be, as of January 20, 2017, the most powerful man in the world.

He beat out Hillary Clinton, a woman who carries her own baggage--none of it nearly as heavy or as dirty as Trump's--yet who is inordinately qualified to be president, a woman who couldn't match him in bombast and showmanship but rose above him in matters of the heart, of commitment, and of intellect.

It wasn't a glass ceiling that was shattered last night, it was our country.  The Republicans--those very same menaces who, through their obstruction and disdain for anyone other than the rich and powerful, caused most of the economic problems plaguing the voters--still came out smelling like roses. They won over the Democrats and held their majority in Congress. Those voters who felt so threatened by the government of their choosing have now willingly bought into an outrageously ludicrous line of demagogic fear-mongering and turned to someone outside of politics for solace and succor. Or revenge.

The postmortems will be coming fast and furious in the days ahead, but the die is cast, our bed is made, our new president is a nasty narcissistic loose cannon who will be in a position to fill his cabinet with his equally slimy agenda-driven cronies, to fill the Supreme Court with Scalia clones, to shut down needed social services, to rape our public lands, to deny climate change, to end the Affordable Care Act, to send packing anyone whose skin color, religion, or ethnic background, doesn't match his idea of a pure America.

And I'm stunned, angry, depressed, mortified, and embarrassed for my country.  I didn't create Trump, I didn't promote him, I didn't vote for him, but I'll have to live with what comes next and so will everyone I hold dear.  Some of them voted for this man, along with the millions of others who saw this inconceivable win as payback of some sort, a punch in the gut to wake us the hell up.

I'll leave it to them to figure out how they'll live in the America they've now created.  And I won't feel an ounce of pity for them when all of their wishes don't come true.