"Donald Trump has asked why I did not speak at the Democratic convention. He said he would like to hear from me. Here is my answer to Donald Trump: Because without saying a thing, all the world, all America, felt my pain. I am a Gold Star mother. Whoever saw me felt me in their heart."

Ghazala Khan, grieving mother of Army captain Humayun Kahn, killed in action in Iraq trying to save his soldiers and innocent civilians.

And he's okay with that.

Donald Trump is a monster of his own making, so comfortable on his solid gold pedestal, so sheltered by his own defensive barriers, there's no chance his hardened heart will ever melt.

He likes it that way.

He thrives on schoolyard bullying, answering every plea to stop his irresponsible childishness with insults meant to slice deep, to leave lasting scars. He brags about taking the gloves off, as if he ever had them on.

He draws huge crowds hungry for blood, ready to jeer at anyone, even people they don't know, when Donald Trump gives the signal. It's a form of entertainment in no danger of being confused with actual leadership.

He would rather be king, but demagogue suits him, too.

He sees his unprecedented, astonishing popularity as a sign that he has at last found his niche. Holding the highest office in the land would give him gravitas.  Nobody, including and maybe especially President Obama, could ever make fun of him, could ever diminish him again.  He would be the top dog, the big cheese, the holder of the keys to his cockamamie kingdom. The people who hate him would be forced to respect him.  He would show those bastards once and for all.

See that quote at the top of the page?  That quote is from a mother who is still grieving after six long years following the death of her hero son.  Her psychic wounds, still so raw, have been opened up again, not by the enemy in a far-off land, but by a lone man right here in the United States who still insists he wants to be president of the country her son died defending.

Mrs. Khan's husband, Khizr Khan, a Muslim, spoke eloquently, near tears, at the Democratic convention, begging Donald Trump to try to understand how painful his words are to Muslims who want simply to live in peace in the country they, too, love. He offered to lend Trump his copy of the Constitution so he would at last understand the purity of our goals, the need to include and not exclude.  Khan's words resonated in such a way they were repeated over and over in the recap of the four-day convention.

Donald Trump could not, of course, let it go.  He went on the attack, accusing the slain captain's father of saying mean things about him, justifying the vengeance he was cooking up, because nobody--but nobody--gets away with insulting Donald Trump.

And then the expected happened: instead of apologizing to the parents of Captain Khan, Trump gave a few seconds of lip service to the heroism of their son and then went on to talk about his own sacrifices.  Honest to god, in a conversation concerning a slain soldier, Trump told George Stephanopoulos he had sacrificed, too:

In that same interview, Trump bragged about his work with vets--another example he thought would serve as a "sacrifice". When Paul Rieckoff, the head of the 200,000 member Iraq and Afghanistan Veterans of America, got wind of it, he reacted:


"For anyone to compare their 'sacrifice' to a Gold Star family member is insulting, foolish and ignorant. Especially someone who has never served himself and has no children serving," Rieckoff said. "Our county has been at war for a decade and a half and the truth is most Americans have sacrificed nothing. Most of them are smart and grounded enough to admit it."

"Smart and grounded" are not words anyone would use to describe Donald Trump. He's a classic braggart, a manchild without boundaries.  He's a flim-flam man, a showman, an actor so hungry for an audience he'll debase himself in gross, disgusting ways in order to keep them coming. 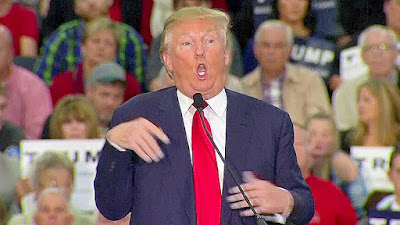 There is one thing he is not.  He is not a candidate for president of the United States.  He pretends he is because he knows if he drops the act his fans will go away. The presidency is the furthest thing from his mind.  He drops hints that he might not take the job if he wins.  He used his son as a surrogate to warn potential vice presidential candidates it'll be a much bigger job than they might think: they'll be doing the day-to-day job of the president, taking care of policy, both foreign and domestic, while Trump will be--and I quote--"making America great again".

Trump is a showman and this season's show is called "The Presidency".  When he loses--and he will lose--a whole new career will open up for him.   He'll become the anti-president--the man who could have got it done, if only.  Every zany, unworkable idea he ever had will balloon to colossal size, now lost to us because of the shortsightedness of the entrenched establishment who, if you can believe it, were terrified of his power.

He'll become Citizen Mussolini, an anachronism with bulging chest and jutting chin and a mouth in a perpetual pout. For a while he'll think he has power just on the strength of his name. He'll be laughed at and ridiculed and then he'll be irrelevant. The cheering crowds will move on.  Except for a loyal few, he'll be alone.