Burning Hillary at the Stake: A Race Like No Other 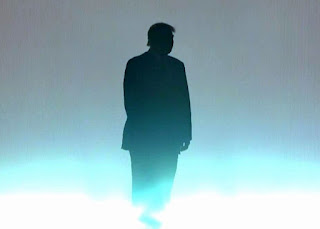 Surreal as that nomination appears, even in the topsy-turvy world of 21st Century Republicanism, it came about because the Party hardliners were helpless to stop it. The people--their people--had spoken. Unwittingly, unintentionally, they had managed to churn up their portion of the masses so effectively they made it easy for a fast-talking charlatan like Trump to pounce on this most golden of opportunities, winning vast numbers of hardened hearts and brainwashed minds.

Trump's early showing in the polls, hard as those rising numbers were to believe, gave the party regulars plenty of time to go through the seven stages of grief (disbelief, denial, bargaining, guilt, anger, depression, and acceptance), put on their happy masks, bite the bullet, and rehearse their lines. ("It could be worse!  It could be Hillary!")  From the beginning, Trump made it clear he wouldn't be needing them to win.  He had a history of smashing people who got in his way.  These guys would not be immune.

Fast-forward to the convention:  It would be a Trump family affair, make no mistake. Trump would be the decider and it would be a show like nothing the world has ever seen outside of Hollywood or maybe Siam. Party platform, that boring old thing, would have to take a back seat to the main event--the coronation of The Man.

What to do, what to do? Talking up Trump is hard, especially when he wasn't their first, second, third, or even seventeenth choice.

Both Paul Ryan and Mitch McConnell, the titular heads of the Republican Party, gave speeches that barely mentioned Donald Trump.  Celebrities like Willie Robertson, the "Duck Dynasty" star, and Chachi (Scott Baio) took up the slack, praising Trump to the highest skies, knowing for an absolute fact that Donald Trump will MAKE AMERICA GREAT AGAIN! GOD BLESS THE UNITED STATES OF AMERICA!

But the award for Best Preview About How It's Going to Be had to go to Chris Christie, Donald's chief-enforcer-apparent, who took to the stage and whipped the crowd into a frenzy with a speech that had nothing to do with Donald Trump (mentioned only four times by name, once in a sentence that went like this: "But this election is not just about Donald Trump."), and even less with fixing the state of the nation, focusing instead on a bizarre, cringe-worthy mock trial of the Democratic Party's presumptive nominee, one Hillary Rodham Clinton.

"As to Hillary Clinton, putting herself ahead of America guilty or not guilty? [Chorus: Guilty!]

Hillary Clinton, lying to the American people about her selfish, awful judgment guilty or not guilty? [Guilty!]

Time after time the facts, and just the facts, lead you to the same verdict both around the world and at home.

In Libya and Nigeria. guilty! [Guilty!]

In China and Syria, guilty! [Guilty!]

In Iran and Russia and Cuba, guilty! [Guilty!]

And here at home on risking America's secrets to keep her own and lying to cover it all up, guilty! [Ditto!]"

Throughout Christie's speech the crowd never let up. The cameras caught their snarling mob-faces, their raised fists, their calls for Hillary's head: "She's guilty! Get her! Lock her up!" 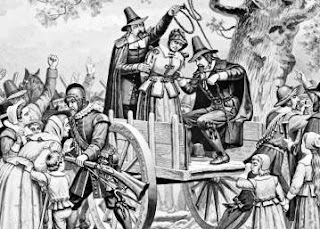 I thought about Arthur Miller's 1953 play, "The Crucible", ostensibly about the Salem Witch Trials but in reality an allegory reflecting the mood of the times--the Red Scare, the McCarthy hearings, the many lives and careers ruined by one man on a mission to make a name for himself by creating fear where there was none. (Three years after his play was produced, Miller himself was brought before the committee and ordered to name names of communists he might know.  He refused and paid the price.)

So how did Christie's speech strike the press, the ever-vigilant press, the press so ready to protect our freedoms they're still reporting on the controversy over Melania Trump's plagiarized speech?  Barely a nudge. They reported it as if it were a typical speech at any old political convention.

So it wasn't just the speech that horrified me, it was the reaction--or the non-reaction--of both the public and the press. We've been here before. Once the McCarthy era fires burned out and the ashes cooled we vowed "never again".

As a country, we vowed never again.