I'm Offended by my Country 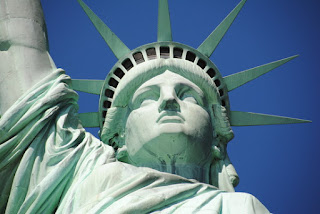 As a denizen of the Internets given to spouting personal opinions I'm not easily offended.  I can't afford to be. It's hard enough to write without having to do it curled up in a fetal position, tears in my eyes, sucking my thumb.

But I'm offended by my country.

I'm offended by the Republican party for opening up the deep, dark hole Donald Trump felt encouraged to slither out from.

I'm offended by the press, whose idea of good journalism is the elevation and celebration of a madman who believes he can be president of the United States.

I'm offended by voters who hate our government system so thoroughly they're working to punish the entire nation by electing officials whose qualifications are limited to a mutual need to make us pay for our supposed sins.

I'm offended by my own Democratic Party for allowing this to happen.  We're supposed to be the party of the people and we've let the people down.  Our leaders wimped out and didn't fight hard enough for the people whose age, race, gender, religion, income, or health kept them down and sometimes out.

The Dems didn't show enough interest in the economy, in our public lands, in our public schools, in our public roads and bridges, in the very water we drink or the air we breathe.  They didn't care enough about the health and welfare of the occupants of our beautiful nation. That's not to say they didn't show any interest. They cared far more than the Republicans ever did. But that's not saying much.

The stock market is up, the deficit is down, but we're not feeling it.  We've cauterized the job cuts so that more people are working, but  too often they're among the working poor. We're winding down our military presence in countries that are not ours but our pantries still go empty while our war chest fills up. We've allowed our prisons to become for-profit industries.  We don't worry enough about other peoples' children.

We're in thrall to the one-percenters, we're leaning toward a church state, we're ripe for a demagogic takeover.

I'm offended by my country when it stops being proud of what it can be and reverts to being ashamed of what we've become. We're in a mess of our own choosing, which means we can fix it if we choose to.  Now we have to choose to.  Because this sure as hell isn't us.