"Deal Me In": Hillary plays the Gender Card. 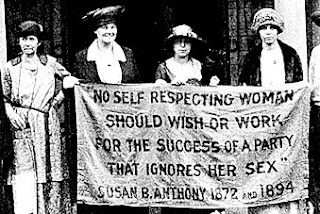 Let's be clear:  Hillary and I are all for playing the gender card.  Hell, men have been doing it since the dawn of mankind. (See what I did there?)

The top job in this country has been held by that other gender since George Washington became our first president in 1789.

It wasn't until 1932 that the first woman was elected to the Senate. Since then, only 31 women have served in that office.

Of the  435 members of the House of Representatives, fewer than 20% are women.

Only 39 women have ever served as state governors.

In too many workplaces women are still paid less than men in the same job.

Our body parts are under attack daily by people who want to take away our right to own them unilaterally.

Our sex makes us vulnerable in every aspect of society, even here in America, even in the 21st Century.

So when we say out loud that it's our turn, that's because it's our turn.  Nothing subversive about it.  It's our damn turn.

As of this morning it looks like Hillary Clinton will be running against Donald Trump for the top job. She'll pull out all the stops to prove she's far more qualified to be president than he ever could be. He'll be using what he sees as his male privilege to attack her.

He won't give up. But I've got news for him: Neither will she. And neither will we.

Dismiss us at your peril, you cocky loser.  Bring it on. You and the rest of your pals dealt this card. Now sit down, shut up, and watch how it's played by the other side.