Clinton to Trump: I'll Take the High Road and You Take the Low Road 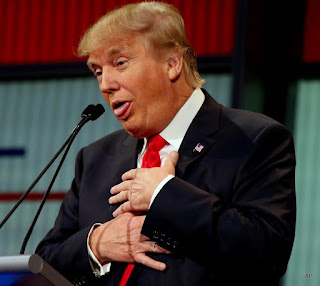 Clinton, the savvy politician, says "bring it on but I'm not going there". Trump will see that as weak.  He'll see that as the woman thing.  What he won't see is the double-whammy already arcing toward him, lobbed by the many who are sick to death of his ignorant, childish bullying.

What Trump still doesn't get--and maybe never will--is that for all his popularity he has many more haters than fans.  Those thousands filling every venue, cheering him on, are the same thousands who filled Sarah Palin's venues, cheering her on whenever she went on the attack against the establishment.  It fills a need, it satisfies an itch, clichéd beyond all reason ("I'm mad as hell and I'm not going to take it anymore!"), but it does nothing to change what most everyone sees as a dysfunctional government.

The way to make change is to get involved.  In Trump's case, a first step might include a high school civics class.  The GOP nominee for president has built his case for being president by showing the world it pays not to know anything about being president.

He aced the test, not by studying or giving the right answers, but by blasting everyone who tried to tell him he's not ready to graduate.  He's the E-minus student running against the Valedictorian, having full confidence that he can bully his way to a diploma.

Everyone who has any sense left in their beaners is laughing at Donald Trump.  It's a serious issue when someone as ridiculously unequipped is this close to the presidency, but barring that, Trump is a joke gone hilariously awful.

Famously funny cynic Fran Lebowitz made an all-too-rare appearance on the Tonight Show, professing her newfound love for Hillary while eviscerating Trump:

But while we're laughing at Donald and scoffing at his equally windbaggish sidekicks, Hillary Clinton is diligently working at proving she has the chops to run the Big Things.

About Trump, she says, "I'm not running against him.  He's doing a fine job of doing it himself."  She's talking, now, about the primaries, but if she wins the candidacy she'll be running against a beast already boasting of the savagery to come.

He's less than one week into his presumptive nomination and it has already started.  The issue of Bill Clinton's affairs is like red meat to Trump the predator, so it was never a matter of if, but when.


"Donald Trump on Friday accused Hillary Clinton of being "an unbelievably nasty, mean enabler" of her husband's alleged affairs and accused her of destroying the lives of his accusers.


The remarks are the first time that Trump has raised the former president's alleged affairs and Hillary Clinton's behavior amidst a flurry of accusations since becoming the Republican Party's presumptive nominee. Trump had previously accused Clinton of being an 'enabler' to her husband's behavior, but he ramped up his rhetoric on Friday.
'She's been the total enabler. She would go after these women and destroy their lives,' Trump said, adding, 'She was an unbelievably nasty, mean enabler, and what she did to a lot of those women is disgraceful."
Trump did not expand upon what he believes Clinton did to 'destroy' the lives of those women."

If it were anyone else but Trump this might seem reckless, and in the real world, considering the rumors about his own checkered past, he would know enough to leave it alone.  But he's confident enough to go ahead because he knows he can always count on that tried and true standby, the double standard.

Yes, I'm crying "sexism".  I'm not just crying it, I'm shouting it, I'm trying to figure out how to bounce it off the moon, sending it awash all over the planet. Blatant, ugly, corrosive sexism.

(And by the way, CNN got it wrong:  This is not the first time Trump has called her an enabler over Bill's affairs.  Back in January a group of GOP women urged him to drop it.  Fat chance.)

No matter what scandal Trump wants to use as ammunition against Hillary Clinton or anyone else who gets in his way, the real scandal is Trump himself.  His behavior is not acceptable, or even normal.  Most of the people voting for him wouldn't put up with him in their own living rooms for a single day, let alone four years.  I don't pretend to know what goes on in their minds.  It's one thing to be sad and disappointed and frustrated and angry at the perpetrators of what looks like wholesale destruction of the very fabric of our society, but it's quite another not to know you're backing a goddamn idjit for president.

From Paul Krugman, "The Making of an Ignoramus".

"Truly, Donald Trump knows nothing. He is more ignorant about policy than you can possibly imagine, even when you take into account the fact that he is more ignorant than you can possibly imagine. But his ignorance isn’t as unique as it may seem: In many ways, he’s just doing a clumsy job of channeling nonsense widely popular in his party, and to some extent in the chattering classes more generally.

"Last week the presumptive Republican presidential nominee — hard to believe, but there it is — finally revealed his plan to make America great again. Basically, it involves running the country like a failing casino: he could, he asserted, “make a deal” with creditors that would reduce the debt burden if his outlandish promises of economic growth don’t work out.
The reaction from everyone who knows anything about finance or economics was a mix of amazed horror and horrified amazement. One does not casually suggest throwing away America’s carefully cultivated reputation as the world’s most scrupulous debtor — a reputation that dates all the way back to Alexander Hamilton."

How many times have you seen me quote George Will, signalling that I actually agreed with him?  It's not a trick question.  This will be the first:


"Donald Trump’s distinctive rhetorical style — think of a drunk with a bullhorn reading aloud James Joyce’s “Finnegan's Wake” under water — poses an almost insuperable challenge to people whose painful duty is to try to extract clarity from his effusions. For example, on Friday, during a long stream of semi-consciousness in Fort Worth, this man who as president would nominate members of the federal judiciary vowed to “open up” libel laws to make it easier to sue — to intimidate and punish — people who write “negative” things. Well.

Trump, the thin-skinned tough guy, resembles a campus crybaby who has wandered out of his “safe space.” It is not news that he has neither respect for nor knowledge of the Constitution, and he probably is unaware that he would have to “open up” many Supreme Court First Amendment rulings in order to achieve his aim. His obvious aim is to chill free speech, for the comfort of the political class, of which he is now a gaudy ornament."

So, okay, enough about Trump.  (Oh, except, did you see that wild Twitter war with Elizabeth Warren?)

How is Hillary preparing to be president?  She's scouring the country, sitting down with actual people, lending her ear, even when she knows she'll get an earful.  She's  talking about issues and not innuendo. She's building a base of supporters, both inside and outside of politics. She's going out on interviews, presenting her qualifications, applying for the highest job in the land as if it really were a job and not a joke, a conquest, or a power trip.

We're still in the midst of the primaries so I need to mention that Bernie Sanders is still in the running as the Democratic candidate.  Bernie Sanders, to his credit, is not Donald Trump.  Donald Trump, to no one's surprise, is keeping his hands off of Bernie Sanders.  In fact, Trump gleefully announces to each and every audience that he's going to steal Bernie's best speeches against Hillary and use them as if they were his own.  (Because Bernie knows some words, I'm guessing.)

Right now, Hillary Clinton is running against two opponents and holding her own.  If she wins the nomination she'll be going against Donald Trump.  Trump's big threat is that he hasn't even started on Hillary yet.

Someone needs to remind him that he's running for president, not chief comical inquisitor.  It's serious business, and gotcha games are for kids.

But don't look at me.  I'm not telling him.  Not that he'd listen to a nasty old bag of a broad, anyway.