The Mortgage Fraudsters and Their Get Out Of Jail Free Card 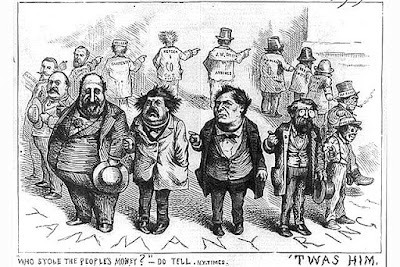 I don't have to tell you that when it comes to Big Money I know nothing. Beyond coming deliciously close to balancing my checkbook once in a while and/or putting a few pennies away in a sock or a next-to-no-interest savings account, finances are a complete mystery to me.  I know people who do know something about Big Money but when they talk about it, it's in a foreign language.  Pretty sure.  When they're talking about billions and trillions they might as well be talking about the enormity of the galaxies.  No comprendo, buddy.  Don't even waste your time.

So when I read a story in USA Today about Goldman Sachs finally getting around to agreeing on a settlement for bilking mortgage customers out of billions of dollars over many years, causing many thousands of them to have to default and move out of their homes, their fine seemed colossal enough where even I should have been screaming with joy.  Over $5 billion!  Dollars!


The glimpse of the New York-based banking and investment giant's internal review process came as Goldman Sachs acknowledged it marketed and sold tens of billions of dollars in residential mortgage-backed securities without weeding out questionable loans as investors had been promised.

“This resolution holds Goldman Sachs accountable for its serious misconduct in falsely assuring investors that securities it sold were backed by sound mortgages, when it knew that they were full of mortgages that were likely to fail,” Acting Associate Attorney General Stuart Delery said as the Department of Justice, state attorneys general and other officials announced the finalized agreement.

They weren't the only ones, of course.  In February, Wells Fargo agreed to pay $1.2 billion for their part in cheating on mortgages.


NEW YORK -- San Francisco bank Wells Fargo Wednesday said it has agreed to fork over $1.2 billion to settle allegations that it fraudulently certified loans in connection with a government insurance program.

In a 2012 lawsuit, the U.S. government accused Wells Fargo of sticking it with "hundreds of millions of dollars" in Federal Housing Authority insurance claims as a result of years of "reckless" underwriting and fraudulent loan certification.
As a result, FHA had to pay out insurance claims on thousands of FHA-insured mortgages that defaulted, the government said.

Around that same time in February, Morgan Stanley agreed to pay $3.2 billion.


“Morgan Stanley touted the quality of the lenders with which it did business and the due diligence process it used to screen out bad loans.  All the while, Morgan Stanley knew that in reality, many of the loans backing its securities were toxic," said acting U.S. Attorney Brian Stretch of California's northern federal district.

Morgan Stanley said its previous financial set-asides for the settlements would prevent the payments from affecting the bank's 2016 earnings. "We are pleased to have finalized these settlements involving legacy residential mortgage-backed securities matters," the bank said.

Well, isn't that special?  Their bottom line won't be hurt at all by it. BIG sigh of relief.

Note that ugly word "fraudulent".  Note, too, that innocent phrase "agreed to pay"--as if paying, for them, is an option.  Note also too there is no mention of anyone going to jail.  Not a single soul from anywhere within those vast companies had to go to jail for their misdeeds. They couldn't even muster up a single scapegoat.  Nobody.  They paid fines large enough to sustain entire cities but it turns out it's no more than money in a sock to them.  So, big frickin' deal.  Let's move on.

When huge institutions cause that much indisputable harm to hundreds of thousands of citizens, when billions of our taxpayer dollars end up having to pay for their crimes, we should expect more from them than a slap on the wrist.  We should expect that they lose everything, and every member of their group who knew anything about it and let it happen should have to spend many thousands of their remaining days in prison

In August, 2013, Sen. Elizabeth Warren sent a letter to Attorney General Eric Holder expressing her dissatisfaction with the criminal-free mortgage settlements.  In it she wrote:


"I am concerned that this might be yet another example of the federal government’s timid enforcement strategy against the nation’s largest financial institutions. I believe that if DOJ and our banking regulatory agencies prove unwilling over time to take the big banks to trial or even require admission of guilt when they cheat consumers and break the law — either out of timidity or because of a lack of resources — then the agencies lose enormous leverage in settlement negotiations."

To which I can only add: You can say that again, sister.  We've been living in a system for far too long where the bigger the crook, the lighter they fall. I don't need to know a single thing about high finance to know it's time to end that insane double standard.

So now we come to the elephant in the room: This is a big election year. My candidate, Hillary Clinton, has taken big bucks in speaking fees from Goldman Sachs and other Wall Street giants. She says they haven't bought her influence, and so far I haven't seen any signs that they have, but if she is the Democratic party nominee we're going to need to know how close she is to agreeing with Elizabeth Warren.  It had better be pretty damned close.  (Let's not get sidetracked by my admission that I'm supporting Hillary.  We've been through this.  Here's why.)

My party, the Democratic Party, has lost its guts, and it's people like Elizabeth Warren and, yes, Bernie Sanders, who are willing to take up the pitchforks in order to bring some sanity, some fairness, to a system that has fallen all over itself to keep from governing as a full-fledged democracy.

Big money is the bane of our existence.  When we speak of billions the way we used to talk about millions, we've lost touch with the common needs of the people.  We read the articles about billion dollar fines and tend to forget how many lives were adversely altered or outright destroyed, thanks to the fraudsters working out in the open with no fear of punishment or retaliation.  They didn't get to that place on their own.

Money talked louder than we did and money won.  Now we're in the midst of a crazy election season, and what we're seeing is the equivalent of an angry mob scene.  Somebody's to blame and somebody has to pay.

Let's hope it's not us again.


(Cross-posted at Crooks and Liars)