What If The Second Amendment Didn't Exist?


Once upon a time, long before The National Rifle Association stopped being a reasonable, responsible hunter's association and became the NRA, the Second Amendment was looked on, if at all, as a remnant of the olden days, when the writers of the Constitution saw fit to assuage the fears of the newly-formed states by assuring them they could form their own militias in case the federal government got too bossy, thinking they owned the place. 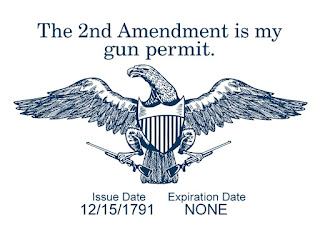 After the Supreme Court gave in to the NRA's demands to ignore that part about the well-regulated militia and give gun owners the seeming right to own any kind of weapon known to man, former Supreme Court justice John Paul Stevens, in an April, 2014 WaPo Op-Ed, proposed the addition of five words to the Second Amendment, clarifying what Stevens believes the original writers meant.  Stevens' revised Second Amendment would read like this:


"A well regulated Militia, being necessary to the security of a free State, the right of the people to keep and bear Arms when serving in the Militia shall not be infringed."

I'm nowhere near Justice Stevens' level of intellect but if that amendment is simply there to address a non-existent militia, it isn't much of a reach to conclude there's no longer a need for a Second Amendment.  (The National Guard may be the closest we come to a state militia, but it's not made up of a motley band of citizens called up whenever the rascally Feds get out of line.  It's an essential branch of the military, an adjunct of the Federal government, enlisted as needed during national emergencies. )

We could resolve these arguments once and forever by repealing the Second Amendment.  Amendments aren't written in stone.  They can be amended and they can be repealed.  Our government repealed the Eighteenth Amendment in 1933, some 13 years after a few rabid anti-liquor folks thought it would be a good idea to do away with alcoholic beverages completely.  (As if!)

So what would life be like without a Second Amendment?  Who, besides the NRA and the gun manufacturers--the wave riders--would be affected negatively by the loss?  Would the arguments for and against regulations and background checks change in any way?  Would each state or municipality have to rethink their local gun laws? Would the Federal government see its chance and confiscate all guns?  Would we be less safe?  Would we be safer?

Once it was gone, who in their right mind would take it to mean their gun rights went with it?  I submit we could lose it tomorrow and it would never be missed.  Nothing would change.  So why is it such a big deal?