So it's Clinton vs. Sanders. Can't We Just Be Frenemies?

Yesterday Joe Biden stood in the Rose Garden with his wife Jill and President Obama and announced he wouldn't be running for president. (Thank you, Joe, you did the right thing. I love you.) It's still early in the election season (WAY early.  Did you know Canadians can only campaign for 78 days? Must seem like a damned eternity, right?) but unless a dark horse comes up from behind, it looks like it'll be a run between Bernie Sanders and Hillary Clinton.

Way back in 2007-08, Hillary Clinton was one of the two front-runners as she battled it out with Barack Obama for the top Party position. The fact that neither of them were white men made the whole contest especially interesting, but the unofficial skirmishes between the Clinton supporters and the Obama supporters were, let's just say, spectacular!  (I learned bad words I didn't even know existed.)  The miff factor was so strong, so relentless, you can still hear echos today.  Some have never forgotten, never forgiven.  And they're b-a-a-a-c-k. . .

I have to admit, they scare me.  Now they're Hillary and Bernie supporters--fervent, passionate, TYPING-IN-ALL-CAPS supporters--and if that's not bad enough, (Not that either Bernie or Hillary are bad. . . No, I will NEVER say that. I've seen bad and they're not it.) they're on Twitter and Facebook.  And so am I.

Facebook and Twitter, I don't have to tell you, are like vast out-of-this-world megalopoli full of creatures who may or may not be what they seem.  On Facebook we "like" people we don't even know.  We do the same on Twitter except we don't "like" them, we "follow" them.  Sometimes we actually grow to like the people we "like".  Ditto the people we follow.  It works magnificently as long as we don't talk about religion or politics or the Kardashians.  (I'm kidding.  We don't talk about the Kardashians.  We don't even know who they are.)

I, a known political junkie, have chosen to "like" a whole lot of people whose topic of choice is politics.  We do the happy stuff, sharing cute pet memes, taking those tests to show how smart we are, but that's because it's hard work trying to save an entire country. Sometimes we need a break. 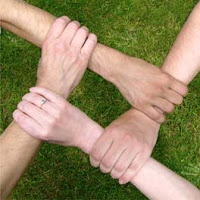 Most of the time, when we're on the topic of politics, we agree on almost everything, including the right to disagree.  We're liberals and progressives, Democrats and Independents, religious and not, with a few conservatives, Republicans, and agnostics mixed in, just for flavor.

Until now, it's been good.  But now we're getting into presidential politics.  The big time. The elections aren't until November, 2016, but we've already begun to get testy.  I see trouble ahead.

I've been defending Hillary as if she's an underdog and needs my kind of help.  I've been looking for any little thing to prove that Bernie isn't a saint.  I hate myself already and it's not even Christmas. (By the way, I'll be taking a short break from politics around Christmas to fight for our right to say "Happy Holidays". I'll be back some time after December 25.)

But we're reaching the point where we're setting up camps and gearing up for battle--against each other. Whichever candidate we're behind is the absolute best.  The obvious choice.  Anyone who can't see that is. . .(fill in the blank, the rougher the better.)

I wish I could just sit one this out.  (I can't, of course.  I couldn't.)  I like the people I "like".  I want us to stay friends, but I can see already that as the months go by our affection for each other, our respect, will dwindle. I don't know if we'll ever get back what we had before.

When the primaries are finally over, one of two people, either Hillary Clinton or Bernie Sanders, will be the Democratic candidate.  If the candidate we wanted doesn't win we won't pick up our toys and go home.  We'll stifle our fury and do what we have to do--we'll work to make sure our next president is a Democrat.

It's not enough to win the argument.  We have to win this election.  I hope we can remember that.


(Also published at Dagblog and Crooks and Liars.)