Why Martin Bashir's Apology Should Have Been Enough


Until Martin Bashir either resigned or was let go by MSNBC this week, I was a loyal fan. I watched Bashir because the things that engaged him usually did the same for me.  At my house, in the Eastern Time Zone, he was on at 4 PM, which meant whatever had happened that day had already been dissected to death by the daytime pundits.  But he had the ability to find something fresh and insightful and, yes, funny, about what was going on out there.  Maybe it's his accent, his enunciation, his eyebrows--I don't know. He is a devilishly clever wordsmith--smarmy, but in a good way.  I have been known to hurry things up just so I can get home in time to watch him.

So I was home and watching on the day he went into that thing over Jake Tapper's interview with Sarah Palin--the part where Palin would not back down from comparing the national debt to slavery.  Tapper gave her many outs, bless his heart, but she stuck by every word.


TAPPER: Mitch McConnell has said no more government shutdowns. He didn't think it was a smart idea.
If you were advising Senate Republicans, would you encourage them to do a --
PALIN: What shutdown? What shutdown?
It was a --
TAPPER: Partial shutdown.
PALIN: -- 17-day slim down -- no, a 16-day slim down of about 17 percent of the government. We need to rein in government.
And when is the time, finally, for people to open their eyes and for the media to -- to open its eyes?
What is the time and the magic number, when it comes to debt, when it comes to this trajectory of government growth, for people to say, we do need to start slimming this thing down?
TAPPER: So, you obviously feel very passionate about the national debt. The other day, you gave a speech in which you compared it to slavery.
PALIN: To slavery. Yes.
And that's not a racist thing to do, by the way, which I know somebody is going to claim it is.
TAPPER: Don't you ever fear that by using hyperbole like that -- obviously, you don't literally mean it's like slavery, which cost millions of people their lives and there was rape and torture. You're using it as a metaphor.
But don't you ever worry that by using that kind of language, you -- you risk obscuring the point you're trying to make?
PALIN: There is another definition of slavery and that is being beholden to some kind of master that is not of your choosing. And, yes, the national debt will be like slavery when the note comes due.
TAPPER: So you're not -- you're not work -- I mean I'm -- I'm taking it as a no, but you're not -- you're not concerned about the language --
PALIN: I'm not one to be politically correct, evidently.
TAPPER: OK.
PALIN: And, no, I don't -- I don't worry about things like that, because no matter what I say, no matter what a lot of conservatives say, they're, you know, they'll be targeted and distractions will be attempted to be made to take the listener and the viewers' mind off what the point is, by pointing out, oh, she said the word slavery in a speech, and, I did say the word slavery, because I want to make a point.
TAPPER: You can understand why African-Americans or others might be offended by it, though?
PALIN: I -- I can if they choose to misinterpret what it is that I'm saying. And, again, you know, I'm sure if we open up the dictionary, we could prove that with semantics that are various, we can prove that there is a definition of slavery that absolutely fits the bill there, when I'm talking about a bankrupt country that will owe somebody something down the line if we don't change things that is, we will be shackled. We will be enslaved to those who we owe.

Oh, Sarah.  Clueless, smug, privileged Sarah. Why is anyone still interested in what you have to say?

See, this is what grinds some of us who think the serious stuff should be left to serious thinkers.  The issue of our country's debt crisis is clearly not something Sarah Palin has studied judiciously.  And clearly her audiences don't expect anything more from her than some funnin' over the fuss the liberals make over every nutty thing the Republicans come up with.

So when CNN's Jake Tapper sits down with Palin for what seems like a real interview with a real leader, giving her the deference a real leader might deserve, some of us, including or maybe especially Bashir, feel the tops of our heads threatening to blow off.

When Bashir began his segment on Palin's national debt/slavery connection, I was all ears. Here we go! Give it all you got, Mah-tin! 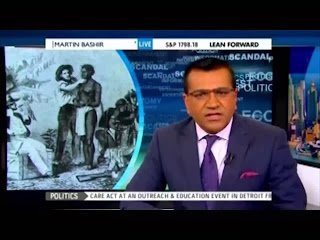 He called her an idiot right off, and I, how you say, blanched. Nooooo! Amateur hour. Don't even go there!

Then he told the story of a sadistic Jamaican plantation overseer named Thistlewood who meted out unspeakable punishments to his slaves.  Punishments involving feces and urine.

If Bashir has ended his piece with the hope that Sarah Palin might never have said what she said if she fully understood what real slaves had to go through, it would have been a case of lesson learned.  Thank you, Martin, for reminding us all. . .

I fully expected that was where he was going. But he wasn't. Reading from a teleprompter with blowup shots behind him of an African slave about to be punished on one side and Palin on the other, this is what he said:

When Mrs. Palin invoked slavery, she doesn’t just prove her rank ignorance. She confirms that if anyone truly qualified for a dose of discipline from Thomas Thistlewood, then she would be the outstanding candidate.

Call me prescient but I saw trouble ahead.

Bashir apologized, of course, on his next show, and he meant it sincerely.  So sincerely, I wondered how it could have happened in the first place. It wasn't something uttered in the heat of the moment.  The segment was planned, the words were scripted, he said them on the air. Sometime during the hours it took to produce the segment, the initial fury over Palin's noxious jabbering should have abated.

It's a mystery why it didn't, but there it was.

The internet went crazy.  The Right--wouldn't you know?--grabbed this unexpected but oh-so-welcome gift and ran with it.  Alec Baldwin, no stranger to controversy, wanted to know why he was suspended for spontaneous raging at a reporter but Martin wasn't for planning and airing this icky diatribe against Sarah Palin.  The cries for punishment never let up.

It was an awful, awful moment, but it was a moment come and gone.  It was an ugly flub in an otherwise smart and often enlightening body of work.  It did not reflect who Martin is, was or ever will be. What he said in that one single utterance, egregious as it might be, was not enough to kill a good man's otherwise trouble-free career.

Martin Bashir has lost his job.  Resigned under pressure, forced out--no matter.  He is among the unemployed because he said something stupid and he should have known better.

We've always been cavalier about someone else's job, and there's no reason to believe it will ever be otherwise. Nobody is out there protesting his dismissal. MSNBC is under no pressure to take him back.

So, Martin, I will miss you.  I wish you the best.  I hope to see you again soon, because you know I will follow you anywhere.
Posted by Ramona Grigg at 11:03:00 AM