The Politics of Cruelty


I'm coming off of my Thanksgiving week high, settling down, and what's the first thing I think of when I get back to my desk to do some writing?  Cruelty. Institutional cruelty, at that.  Political cruelty.  The kind of cruelty that knows no bounds and fears no punishment.  A new kind of cruelty, right out in the open and expecting rewards.  The New America, courtesy of the Tea Party, the Koch Brothers, Leviticus and Deuteronomy.

I had a lovely week.  Our dinner was great, I avoided Black Friday, we celebrated a good man's birthday, and our 350 mile trip back home was uneventful.  No wind or snow or traffic jams, and the ferry, our lifeline, was running on time.

Maybe it was because of that fine respite--I don't know--but at my desk those thoughts about where we are on the inhumanity front kept coming through.

If there is a catalyst, I blame Joe Arpaio, the infamous, publicity-seeking sheriff of Arizona's Maricopa County.  He's the guy who thinks it's cute to keep his prisoners in pink underwear.  He stays awake nights trying to come up with ideas to humiliate and demoralize the inmates in his care.  He gets a real kick out of it and never misses a chance to publicly tighten the screws.

To save money, Arpaio says, he feeds his prisoners only twice a day on between 15 cents and 40 cents a meal.  The meals are vegetarian, no salt and pepper.  He's working on charging them a dollar a meal, because, he says, "Everybody else has to pay for their food, why should they get freebies?"

Last Wednesday he took the time to tweet his Thanksgiving menu:

"Thanksgiving menu is all set! Hope the inmates give thanks for this special meal being served in the jails tomorrow." 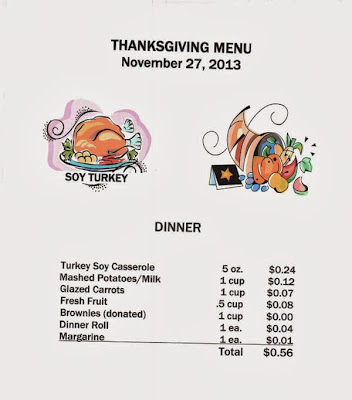 Five ounces of turkey soy casserole and donated brownies.  56 cents a meal.  Did he do it to save money?  Sure.  Did he have to do it?  No.  (Did he eat it himself?  Have you seen him?)

But Joe is small potatoes compared to the various Federal, state and local leaders busy thinking up ways to stick it to the little guy.  Governors refusing Federally endorsed Medicaid for their citizens.  A $40 billion cut in food stamps.  A fight to block minimum wage hikes.  Cuts in unemployment benefits.  Cuts in Veteran's aid.  Cuts in public education.  Complete and total neglect of crumbling infrastructure.  Refusal to recognize the Affordable Care Act, along with a hearty wish that that damned website would just die already.

Except Joe Arpaio, but only long enough to torment his inmates for yet another day.  Then he gets to go home, where nothing can hurt him.  Ever.
Posted by Ramona Grigg at 8:35:00 PM