Protecting Wolves by Throwing Them to the Wolves?


Yesterday I wrote about Opening Day for Michigan’s deer hunting season.  But yesterday was also opening day for a hunting season not seen in Michigan for almost 50 years.  Despite pushback from many different organizations, and petitions set up on a whole lot of petition sites, our grand Poobahs in Pure Michigan caved once again to special interests and instituted a hunting season for wolves. 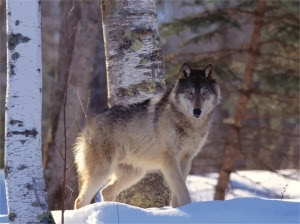 There was a time not so long ago (pre-1965) that our wolf population was zero, and we didn’t like that.  Other states had wolves; why didn’t we?  So in 1965 we gave wolves legal protection in our state. How we got the word out to the wolves, I don’t know, but over the years a few of them began to straggle in.

In 1974, after only six confirmed sightings in nearly a decade, we decided something had to be done.  Four wolves were captured in wolf-heavy Minnesota and plunked down in the Huron Mountains in the Upper Peninsula. Within eight months they had all been killed.  (Nobody ‘fessed up.  Surprise.)  None of them reproduced. (See Gray Wolf timeline here.)

Sadness at the DNR.  They wanted a wolf population in the U.P.  With the help of the Michigan Wildlife Fund (See below) and other protections, including habitat enhancements, wolves finally began to appear in greater numbers.

The population expanded (Woo Hoo!), but with the expansion came more and more incidences of predation.  The wolves were killing livestock and pets and were spotted too close for comfort near human population centers.  Once their numbers grew to more than 400 the DNR began to see them as a liability and not an asset.

Could there have been any other outcome?  The Upper Peninsula isn’t a zoo or a preserve.  Wolves will be wolves.  But this was excellent news for the hunting interests out there salivating, hoping against hope that wolf numbers would continue to explode and that Canis lupus would keep that wolfish behavior going.

They have long been making plans for the inevitable wolf hunt.

And yesterday it happened.

In the Detroit Free Press:

“I’m an avid hunter, so this is an opportunity that doesn’t come along very often,” he said today. “It may be the last hunt, too, if the environmentalists get their way.”

As hunters excitedly prepared for the hunt this afternoon, the mood was far more somber about 300 miles to the south in Mt. Pleasant, where the Saginaw Chippewa Tribe planned a candlelight vigil for the animal so iconic in their tribal heritage.

“The gray wolf is significant to our culture,” said tribal spokesman Frank Cloutier. “It’s a part of our creation story, very significant to who we are and what we believe.”

The hunt calls for a maximum of 43 wolves to be harvested in three designated zones of the Upper Peninsula. It is slated to run from dawn Friday through Dec. 31 or whenever the target number is reached. Michigan has sold 1,200 licenses for the hunt.

It’s not about culling predators (which wolves most certainly are, but they knew that in the 1970s when they were encouraging the population.)  Farmers and homeowners already have the right to shoot predators, including wolves, on their property.

It’s not about feeding families (nobody eats wolf).

For the state, it’s all about giving hunters a new sport.  It’s all about the money.  Not only the uptick in license fees, but in years ahead the kill limit will increase and Michigan will benefit as one of only a handful of Midwestern states allowing wolf hunting.  The economic run-off could be big.

In Michigan we can pay extra for license plates that will aid our favorite organizations.  We have one with a picture of a loon, for example, that aids the Michigan Non-game Wildlife Fund.  We can also check off a box for the same fund on our Michigan Income Tax forms.
From the MWF page:


Since 1983, over $10 million has been raised for these important management efforts through voluntary check-off contributions on the state income tax form, sales of specialty license plates, and by direct donations. Six million of that $10 [million] dollars has been placed in a permanent trust, and interest from that trust will continue to support threatened and endangered species well into the future.

The Nongame Fish and Wildlife Fund is responsible for:


So now that they’ve decided our once threatened and endangered wolves are out of the woods, where will the wolf money go?  Will the DNR keep “helping” the wolf population they so purposefully worked to expand, now that the crew in Lansing has caved to the hunting special interests and reclassified the wolf as fair game?

Note, too, that not a single dollar of the money going toward wolf protection came from hunters’ license fees, even though they’re the ones who’ll now benefit from all that TLC.  The general population donated all of it, thinking it would actually go toward protection and education.  Nobody ever mentioned wolf-hunting.

John Barnes at MLive quotes Bob Graves, one of the Upper Peninsula hunters yesterday (My emphasis below, because, yes, they really say this crap out loud.  I’ve heard it, or something like it, more times than I care to count):


“Yes, I’ll take the pelt, but that’s not why. It’s not (being) here to put a trophy on the wall, it’s to experience the outdoors, and to hunt a majestic animal, a beautiful animal.”
There is another reason too, adds [Mark] Bird, 62[, of Kent City]. “This might be Michigan’s only wolf hunt. It might be just once in a lifetime opportunity.”

So that’s it.  There’s talk of putting the issue on the ballot in 2014, but, even with enough signatures, and even with an iron-clad “no” vote, there’s no guarantee our current Koch-based administration won’t just ignore the will of the people.  They’ve done it before.

As of this writing, three wolves have been taken.  The DNR keeps track and so can we.


In those days we had never heard of passing up a chance to kill a wolf.  In a second we were pumping lead into the pack, but with more excitement than accuracy; how to aim a steep hill shot is always confusing. when our rifles were empty, the old wolf was down, and a pup was dragging a leg into impassable slide rocks.

We reached the old wolf in time to watch a fierce green fire dying in her eyes.  I realized then, and have known ever since, that there was something new to me in those eyes-- something known only to her and the mountain.  I was young then, full of trigger itch; I thought that because fewer wolves meant more deer, that no wolves would mean hunters paradise.  But after seeing the green fire die, I sensed that neither the wolf nor the mountain agreed with such a view.

NOTE:  A big Thank You to Chris Savage at Eclectablog for choosing this post as a Guest Post for his website today.  Check it out!
Posted by Ramona Grigg at 1:56:00 PM