The Obamacare Rollout was Bad. The Fallout is Even Worse. But the Plan Just Might Work.

The ACA rollout is a mess.  I mean, really--only six people were able to sign up on the website the very first day?  Insane.

But what did we expect?  They're saying the website doormen woefully underestimated the numbers of drive-bys and joiners on that first day.  It's rumored they only planned for 250,000 visitors.   After all the fuss about Obamacare, they actually thought a mere quarter-million curiosity-seekers would line up to get inside?  On any given day on YouTube the antics of a single adorable kitten can get more than 250,000 hits.

This is Obamacare, O ye gentle incompetents over there at HHS.  What were you thinking?  You've got a few million people out there breathlessly awaiting the day you admit defeat and shut the whole thing down.  Many of those same people are in positions of power.  The spotlight is on them every time you screw up.  They get to call you names and then, if you fail or even falter, they get to say "Told you so."

They're already saying you're pushing a plan that will never work, that it's a scam, that it's the devil's work.  To their minds it's settled, then.  Obamacare is a scourge and it needs to be eradicated from the face of the earth.

The hitch in all this is that they're not obligated to come up with something else to take its place.  Nobody expects that.  Their one and only role is to find the nearest public stage and read from their "Eviscerate Obamacare!" scripts.  And where are you in all this?  You're in the wings setting up their scenes and feeding them their lines.

Republicans, to a person, worked overtime for years to stop any hint of a public health care plan.  Even one as watered down as Obamacare is a danger to them and their monied interests.  But in spite of their hopes and plans for interference-free health care practices and profits, the unimaginable has happened: The Affordable Care Act, a frail shadow of its original promise but a threat nonetheless, is now the law of the land.  Now all these frantic losers are left with is a chance to work overtime to make sure it doesn't succeed.

The U.S Supreme Court gifted the opposition with yet another roadblock:  Individual states now have a choice and can opt out of portions of Obamacare--including the Medicaid options.  They'll have the extra advantage of letting the Fed (that's us) pay for anything they don't want to be a part of.  Talk about a prescription for failure.  I'm guessing they're ecstatic about it.

The Essential Wendell Potter, former CIGNA CEO turned whistleblower, makes it no secret that what we need in this country is universal health care.  He's not happy with the ACA rollout disaster, for several reasons, including this one:


"HHS wasted valuable time trying to persuade more states to operate their own exchanges. Officials apparently deluded themselves into thinking that even some of the red states could be persuaded that it would be in their best interests to have a state-run exchange than one run by the federal government. In hindsight, those officials wasted months in which time and resources could have been devoted to making sure the federal exchange would work on Oct. 1. HHS officials should have realized from the beginning that Republican governors and state legislators had no incentive for Obamacare to work. There wasn't a chance that they would operate their own exchanges if doing so might enhance the chances that Obamacare would be perceived as a success. "

No kidding. Texas, anyone?  Potter has been on this since the beginning, exploring the depths to which the opposition will go in order to kill the dreaded Obamacare.  It's not a pretty picture.  (More from him here and here.) 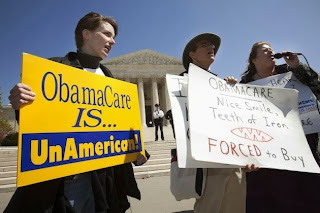 We have to keep reminding ourselves that this is just the beginning.  Universal health care is in the infant stages; there will be falls and failures all over the place until we get it right.  Outside of Medicare and military care, we've never been anywhere close to the kind of public options we're heading for now.  Some of it will work, but some won't.  We'll adjust.  And we'll never want to go back.

The powers opposing this first step won't ever adjust, either.  They'll fight this to the end and beyond.  (They can't help it; it's in their DNA.) We have to make sure they'll lose.  But first we have to make sure we have the weapons to fight them.  That would mean--you ready for this?--a health insurance program that works the way it was promised.

Nobody ever won a battle by handing ammunition to the enemy.