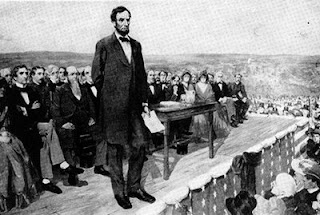 Filmmaker Ken Burns has embarked on a new venture--this one based solely on Abraham Lincoln's magnificent speech at the consecration of the Civil War battlefield cemetery in Gettysburg, PA.  Lincoln's address, on November 19, 1863, took just over two minutes to deliver,unusually short for any time, for any president, but those few words were so poetic, so powerful, it lives on as our best known, best loved presidential speech.

Burns began working with a group of students at the Greenwood School in Putney, VT–most of them afflicted with autism and other learning disorders, including ADHD–after learning that on every anniversary of Lincoln’s famous speech, each of the kids memorized and then took turns reciting Lincoln’s famous speech.  To celebrate the upcoming 150th anniversary of the president’s address, he decided to film the students’ recitations.

From there he began to think large--no surprise--and thought it would be great if all Americans would memorize the speech, make a video of their recitation, and send it to him to include on the website he'd set up called, "Learn the Address".

Every living president and dozens of well-known Americans have already participated, and all of their entries are on the website.  They're all there and they're all inspiring, but one of my favorites is the one by Gabby Giffords and friends.

I don't know how to do it myself or I might try it, but if you know how and want to do it, make a video of your reading or recitation of Lincoln's stirring speech and follow these submission instructions.  Then, if you read it here first, please send me a link so we can see it, too.

Four score and seven years ago our fathers brought forth on this continent, a new nation, conceived in Liberty, and dedicated to the proposition that all men are created equal.

Now we are engaged in a great civil war, testing whether that nation, or any nation so conceived and so dedicated, can long endure. We are met on a great battle-field of that war. We have come to dedicate a portion of that field, as a final resting place for those who here gave their lives that that nation might live. It is altogether fitting and proper that we should do this.

But, in a larger sense, we can not dedicate -- we can not consecrate -- we can not hallow -- this ground. The brave men, living and dead, who struggled here, have consecrated it, far above our poor power to add or detract. The world will little note, nor long remember what we say here, but it can never forget what they did here. It is for us the living, rather, to be dedicated here to the unfinished work which they who fought here have thus far so nobly advanced. 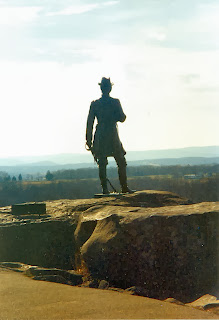 It is rather for us to be here dedicated to the great task remaining before us -- that from these honored dead we take increased devotion to that cause for which they gave the last full measure of devotion -- that we here highly resolve that these dead shall not have died in vain -- that this nation, under God, shall have a new birth of freedom -- and that government of the people, by the people, for the people, shall not perish from the earth.