We All Won Last Night

President Obama won a second term last night and it wasn't even a squeaker.  The Senate and the House stayed pretty much the same, but Elizabeth Warren, Tammy Baldwin and Tammy Duckworth are going to Washington.

Joe Walsh, Richard Mourdock and Todd Akin will wander off into an oblivion they so richly deserve.

Karl Rove was seen on Fox howling foul over Ohio with such naked grief his election night companions could only look on, astonished.

Donald Trump threw such an incomprehensible hissy fit on Twitter you just had to know the little guy was not happy.

Mitt Romney won't be Grand CEO of the United States of America and the incorrigible members of the top one percent may finally have lost the keys to the candy store.

Mitch McConnell, after four long years of egregious intransigence, got no satisfaction.  He did not make Barack Obama a one-term president.

And Joe Biden is ours for four more years.

Barack Obama transcended an unprecedented barrage of hatred and constant attempts at humiliation and now has another chance to help us out of the mess we're in.  We can and will move forward, but it'll take a massive effort on both the president's part and on our own.

We can do this. 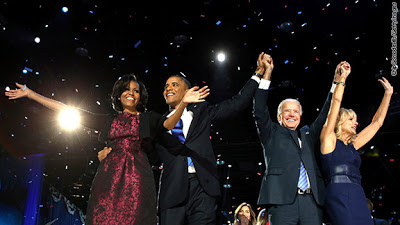