5 AM EST.
I'm up and already nervous about what this election night will bring.  I want the Democrats to win everything.  I want the Republicans to lose in numbers large enough to show them the error of their ways.  I'm so biased that way there's no pretending otherwise.  I know it won't happen, but if I were wishing upon a star it's what I would be wishing for.

I'm an old-style liberal--a dreamer, an optimist, a pie-in-the-sky Pollyanna.  There aren't many of us left, mainly because that kind of nonsense has been knocked out of the more sensible of us.  With me, it's still there, and at this late stage  I have a feeling it's here to stay.


Everybody wants what's best for this country.  We want it healthy, wealthy and wise.  We want the pursuit of happiness to lead somewhere. None of us thinks we're at that point, but at the same time none of us can agree on the direction it will take to get us there.

We tend to want to simplify our problems, laying blame wherever it might easily fit, but in our hearts we know the society we've established for ourselves is so magnificently complicated what we truly understand wouldn't fill a droplet in the middle of our vast oceans.

In addition, fully half of us thinks the other half is nuts.  I'm not such a dreamer that I actually think no matter who wins the presidency, tomorrow is the day we'll all magically come together.   We won't.  Odds are, we never will.  It's not only not likely, it's not even normal.  We thrive on individualism.  It's our one claim to fame.  Or so we would like to believe.


I want my side to win, but I want every vote to count.  I want the people of voting age to do their civic duties and get out there and let their voices be heard.  I'm heartened by sights of long lines snaking around buildings, even while I'm furious that people have to be made to stand in long lines for hours in order to vote.

I won't be going to the polls today.  I've already voted, but now that the big day has dawned I'm sorry I jumped the gun.  I miss not climbing the steps of our township hall and filling out my papers and kibitzing with the poll workers.  I want to stand at the table and do my thing behind red, white and blue striped curtains.  I want to stand at that funny little machine and watch as my ballot gets sucked into it, ready to be counted.  I love that. 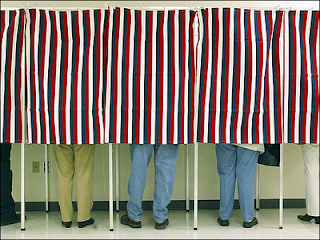 Because I believe our vote is our right.  It is our privilege. It is our duty.  Anyone who doesn't believe that voting makes a difference hasn't looked around.  Every one of our government leaders got there because they were voted into office.  Think about that.

(Cross-posted, as usual, at Dagblog.  Election Night live-streaming.  Come and join us!)
Posted by Ramona Grigg at 8:16:00 AM