Fall Comes to the U.P

At the easternmost edge of Michigan's Upper Peninsula, where I live, the land is low.  In the deep south it would be called the low country.  Here it's called the cedar swamp.  Where there isn't swamp there is rock, where thin sheaths of earth allow only the shallow-rooted trees to thrive--the quaking aspen, white birch and the Michigan cottonwood known as Balm-of-Gilead.  The weed trees.

As beautiful as these trees are in the fall, it's the maple and oak that thrill us with their gaudy, exuberant colors.  It's the views from lofty heights of miles of patchwork quilt, the breathtaking drives through golden tunnels, the blue and gold of our Great Lakes, that draw millions of tourists each year to northern Michigan and across the Mackinac Bridge into the upper peninsula.

There are small areas here in the eastern edge of the peninsula that are high enough and have built up enough forest humus to support the hardwoods that give us the most color, but to truly appreciate the spectacle, one has to go west.  Which is what we did last week.

But back at home or nearer to it, fall means clear air and a golden light and new discoveries every day.  A few weeks ago we were driving the back roads near Rudyard when we came upon a field full of sand hill cranes.  It's  been a few years since we've seen them gathering, and it's about time for their migration.  Michigan is one of many flyways as they move from the far north to the places where they winter. 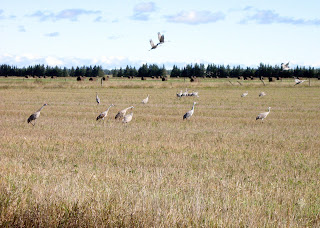 A family of cranes has nested across the bay, within sight with binoculars, but this is the first year we've seen them on our shore. 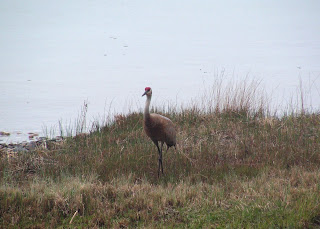 Yesterday as we walked our circular mile, we kept hearing the cranes but couldn't see them.  Finally, as we came to a clearing, I looked up and saw them by the dozens high in the sky.   They're leaving now and I'm not ready to say goodbye.

In our part of the country, fall is not just a season, it's an event.  We never take it for granted, and we never miss a chance to revel in it. And, of course, I never miss a chance to photograph it.  We live near several nature preserves and walk their trails often, but in fall their free access is a glorious gift.

The tamaracks are the last to turn.  They signal the end of the fall colors; when they're done it's all over.  Tamarack needles fall off, leaving the branches bare, and a stand of winter tamaracks looks like dead trees in a dismal swamp.  Then, in spring, their needles come back mint green, then turn forest green, and they're back to looking like conifers again.

Northern Michigan is pretty special any time of the year, but in the fall it rises to spectacular.  I love that about my state.


(Photos are the property of Ramona's Voices.  Please ask permission before using.)