Obamacare Ruled Not a Four-Letter-Word. Damn!

I won't be explaining the whole thing here, not because I can't (I really can't), but because every person with a keyboard has already weighed in on what it all means.  But even though I didn't know exactly what was going on, I was on top of it all, even before the pundits on TV.  At the very moment the decision came down, the supersmart bunch at SCOTUSblog were live-blogging from inside the courtroom, sending out the minute-by-minute news as it happened, ticker-tape style, and I have to tell you, I got goosebumps!  Because there I was, in the loop, watching those guys on MSNBC having to wait until Pete Williams came outside to tell them what had gone on inside--which, ha!  I already knew!  (Click here for SCOTUSblog's simple explanation of what happened at the Supreme Court today.  It'll explain everything.  At least for today.)

Yes, it was quite a day  The decision came down around 10:15 AM or thereabouts, and within minutes the screws began to come loose.

Both Fox and CNN jumped the gun and told their viewers Obamacare had been declared unconstitutional. 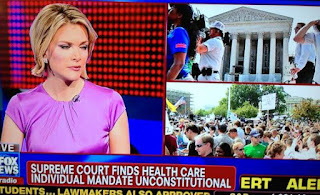 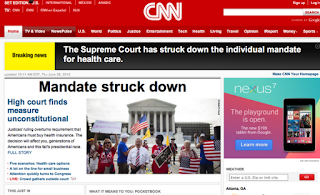 Petitions to impeach Chief Justice Roberts appeared and people came out of nowhere to sign the things.  One petition got 124 signatures before it shut down, for reasons known only to the petitioners.  Another one was at 28 signatures by 9 PM (including the ubiquitous Seemore Butts of Geneva, Il.), hoping for 1000 names by whenever.

Matthew Davis, a former GOP spokesman in Michigan wrote an email right after the decision that moved swiftly through the blogosphere,   The Koch-fueled Mackinac Center published it on their CAPCON page (Michigan Capitol Confidential), along with some straight reporting that gave no indication of where they stand when it comes to (cough, gag, retch) Obamacare.


A Lansing-based civil rights attorney who has held positions with the Michigan Republican Party and Department of Corrections, questioned in a widely distributed email today whether armed rebellion was justified over the Supreme Court ruling upholding Obamacare.

Matthew Davis sent the email moments after the Supreme Court ruling to numerous new media outlets and limited government activists with the headline: “Is Armed Rebellion Now Justified?”
He stressed that he wasn't calling for armed rebellion but added his own personal note to the email, saying, “… here’s my response. And yes, I mean it.”

He said he was writing with an "eye toward asking at what point the Republic is in peril."
“There are times government has to do things to get what it wants and holds a gun to your head," Davis said. "I’m saying at some point, we have to ask the question when do we turn that gun around and say no and resist.

"Was the American Revolution justified?”

Davis said the key word was “justified,” adding that a peaceful resolution toward changing the law is the goal. He said rebellion often is the end result of people who get backed against a wall and wondered when that might occur when it comes to the Obamacare ruling.

Michael Savage offered up the reason Roberts voted the way he did:  It was his epilepsy medication.  Yeah.  That's the ticket.

In the Twitterverse,  a rash of tweets went viral, much to the consternation of the original tweeters who swear they never, ever, ever tweeted that if Obamacare wasn't overturned they were moving to Canada!