Our Dependence on Independence Day

There are many who complain that our Independence Day (now, sadly, just called the Fourth of July) should be observed not on the actual July 4 but on the Monday closest to it in order to have that long weekend we so cherish here in America. That's like saying Christmas should be celebrated on the Monday closest to December 25.  Some things are sacrosanct.  The day our founding fathers signed our Declaration of Independence from England is one of those days.

It is also the day almost all of us leave our workplaces behind and get together for parades and barbecues and fireworks.  That it happens to fall on a Wednesday this year is a bummer for some, but that's the way it flies.  It's not close to either weekend and confusion reigns over which days to take off in order to travel to the Fourth of July destination.  For many more this year, it's a one-day holiday and then it's over.

In our remote area, Wednesday Fourths are deadly to the merchants.  People just aren't arriving in crowds large enough to keep them going through the summer and beyond into winter.  I feel sorry for them, of course, but I hope they don't notice that I'm not hanging around, either.  I'm taking off today to spend the day in the city where the parade will be larger and the fireworks will be flashier, and I have to admit I'm feeling a little guilty about not staying put in the place where my few dollars might actually make a difference.

So here is my contribution today:

The actual Declaration of Independence, word for word.

Norman Lear's paean to this day, Born Again as an American.

The DAR makes amends and Marian Anderson can at last RIP.

And how it looks from here: 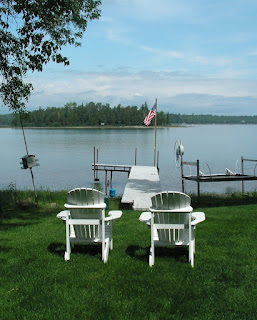 Enjoy your day, stay safe, be happy, and be ready to report to work again tomorrow, when we take up the cause for saving this battered country.  Those freedoms they fought for so valiantly more than two centuries ago haven't exactly been won.

But we'll get there yet.