Help! Michigan has Fallen and it Can't Get Up!

It shouldn't be news to anyone that Michigan is under siege.  There is a whole contingency out there trying to get the word out, including Chris Savage at Eclectablog, Eric B. at Michigan Liberal, and Rachel Maddow, who calls the takeover of Michigan, "epic" and "The greatest story never told."

Who's doing the takeover?  None but our own government. Our own elected government.  That's right.  We didn't just get taken over by the dark forces because we let our guard down at the gates.  No, the majority of registered voters in our state apparently all took leave of their senses at the same time and voted them in.  They (as opposed to me and a bunch of other people who tried like hell to keep it from happening) gave complete control of our beautiful state over to a Republican majority.   They own the executive branch, the judicial branch, the senate and, while they might have slightly less than the 2/3rds vote needed to pass bills in the house, they've bypassed that requirement nicely by not allowing a roll call vote and capping it off by pretending not to see all those raised hands on the Democrats' side of the aisle when a show-of-hands vote is cast.

Now, if this Republican majority somehow took leave of their own teapartisan senses and decided, out of the blue, to be fair minded and actually represent the needs of all people in our state, this might not be a problem.  But you know and I know and that blank wall over there knows, that's pure pipedreamism.  As we've discovered--much to our dismay--horror movies have nothing on the state of the state of Michigan these days.

We have an enhanced Emergency Manager law in our state that gives Governerd Snyder (Former president of Gateway, Inc.) unprecedented control to take over any municipality showing signs of going under water budgetarily.  He has decreed that he can declare a financial emergency and appoint an emergency financial manager who can then abolish any sign of a duly elected government and take the town over.

So some good citizens in our fair state started a petition drive to get that unprecedented Emergency Financial Manager law watered down to a point where it was actually an Emergency Financial Manager law again and not a license to steal whole towns.  (Note:  It's not the EFM law that's unprecedented, it's the scope.  Snyder's predecessor, Dem Gov. Jennifer Granholm put the law into effect, apparently not thinking ahead to the day when some pseudo-governor-of-Nottingham might come along and tweak the law just enough to take over entire towns by relegating their chosen leaders to duties such as coffee-pouring and the taking of minutes at meetings the Emergency Financial Manager calls in order to remind them just how useless they are.)

Those good petition-drive citizens were so successful, they gathered over 200,000 signatures--40,000 more than they actually needed.  Boy, did that make those Republicans mad!  So they did something unprecedented, even for them:  They declared the font size on the petitions wrong, wrong, WRONG!


No, I'm not kidding.  Despite the protestations of the petition printer, who knows his fonts and says unequivocally they're 14 pt and legal, the petitions were thrown out and--surprise!  The EFM issue will not be on November's ballot.

Well, we're disappointed and it's in the courts now.  (In the Michigan courts, however, where snowballs' chances in Hell have far better success rates than current Democrats.)

But all is not doom and gloom in Michigan these days.  Former Republican gubernatorial and presidential candidate Thaddeus (Thad) McCotter, a man not normally known for his ability to give Democrats the giggles, gave us reason to laugh so heartily last week we're still snickering even whilst fighting that damned EFM law.

A bunch of Thad's guys went out collecting signatures for his House seat re-election and when they came back and told him it was all done, he had no reason to believe they were either incredible boobs on par with those guys in "Dumb and Dumber" or they were bloody saboteurs.  They didn't just try to get away with duplicate signatures, they actually photocopied petitions and used them over and over.  As if no one would notice 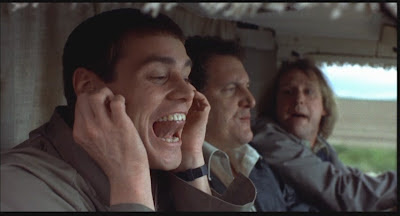 
A formal review by the Bureau of Elections revealed various discrepancies in the petition filing, including duplicate signatures and the appearance of altered petitions.
McCotter released a statement on Thursday afternoon that read: “I thank the Michigan Secretary of State & Attorney General for commencing the criminal investigation of petitions I requested Tuesday; will assist as they see fit.”
Gisgie Gendreau, spokesperson for the Secretary of State’s office, said 243 signatures out of 1,833 were valid. “There appears to be some election law violations involved,” Gendreau said earlier this week.
As a result, the secretary of state’s office informed McCotter, R-Livonia, Friday that he lacked enough signatures to qualify for the ballot. McCotter declared Tuesday morning he is running as a write-in candidate for the 11th District of the House of Representatives.

The four-time winner of a House seat can't even gather 1,000 legitimate signatures in a district the size of a small country gerrymandered to his distinct advantage?  Oh, jeez!  I can't breathe!

There is a potential dark side to this, in that the guy who wants to win McCotter's seat on the Republican side is an avowed Tea Party Libertarian and might just win (and it could be that McCotter could survive a write-in), but give us Democrats a few minutes to engage in a few guffaws here.  Please. Lord knows it's a rare happening in these parts.

(For the record, the front-running Democrat vying for McCotter's 11th District seat is Canton physician Syed Taj. Nice man. Read about him here.)

**I'm going to end this some time soon, I promise, but I can't stop without mentioning Pete Hoekstra's latest attention-getter:  He's running for Senate once again against Debbie Stabenow and he apparently got the word (probably from Donald Trump) that the Obama birther issue must not die.


Pete the Perennial Politician is pushing for a National Birther Office, where all future presidential candidates must go to prove without a shadow of a doubt that they're actual U.S CITIZENS!!  (Good thing Pete doesn't want to run for president.  He was born in THE NETHERLANDS!!)

And so it goes in Michigan, Pure Michigan.  Pity about that underside.

**Addendum:  Heard from Chris Savage at Eclectablog and he tells me it's not exactly a done deal that the repeal of the Emergency Manager act won't be on November's ballot.  It's in the courts right now, so stay tuned.  Also, I should have remembered that they took the word "Financial" out of "Emergency Financial Manager" so now they're just "Emergency Managers".  (Better to give them even more powers, which they obviously need in order to take over completely.)
Thank you, Chris.

***Addendum II:  6/2/12.  Thaddeus McCotter decides to end his campaign altogether.  Would be good news except for that Tea Party guy lurking in the wings, waiting to take his place.