Today is May First, or May Day.  It's the day when workers around the world traditionally rally to show solidarity and support for one another.  It's the real Labor Day. While our own Labor Day has become a holiday, a day of picnics and celebration, May Day is and always will be an international day of protest--a reminder of worker rights and worker dignity in a world gone mad with greed.

Labor in America is under siege, like nothing we've seen in this country since the 1930s.  Whatever wage scales and rights and protections had been fought for and won over the years have slowly eroded away in this new, bizarre and reckless version of take-over capitalism.

This year, here in America, planners have been at it for months, organizing what they're hoping will be a May Day to remember.  There is talk of a general strike, but whether the grass-roots activists are able to get it up and running is still to be seen.  Media for the 99 percent is planning to live-stream events across the country.  You can watch it here:  (No sign of James Dobson this year, by the way.  He will be missed.)

Two years ago, I wrote a piece that included the origins of May Day. In case you missed it, here it is again.  Note there is no mention of the Occupy movements.  That's because they barely existed then. Now Occupy Wall Street and the spin-offs are forces to be reckoned with, just the tonic to wake up the sleeping giant known as labor. We'll see what happens today.  The OWS website is going to livestream events around the world today.  I hope you're out there, and I hope it's big.

May Day: Workers of the World, Hang in There


In a proclamation printed just before May 1, 1886, one publisher appealed to working people with this plea:

•War to the Palace, Peace to the Cottage, and Death to LUXURIOUS IDLENESS.

•The wage system is the only cause of the World's misery. It is supported by the rich classes, and to destroy it, they must be either made to work or DIE.

•One pound of DYNAMITE is better than a bushel of BALLOTS!

•MAKE YOUR DEMAND FOR EIGHT HOURS with weapons in your hands to meet the capitalistic bloodhounds, police, and militia in proper manner.        IWW, The Brief Origins of May Day

Okay, so that's the kind of thing that gave Socialists a bad name.  In the name of civility and good manners we've moved on to less violent (but probably less effective) ways of getting our message across.  The larger point here, though, is that since the 19th century, workers of the world have embraced May Day as the day to honor the sacrifices of the laboring classes.

In 1958, despite Joe McCarthy's earlier best efforts,  the Cold War Commies and Socialists were still purportedly climbing out from under every rock in every little burg in the US.  The VFW saw trouble in those May Day celebrations and foiled those plotters by renaming it "Loyalty Day".  Congress made it official and Ike actually signed it into law, but now, apart from a few VFW chapters and a few small towns, Loyalty Day is pretty much forgotten. (Not that loyalty isn't important, mind you. It is.  My loyalty to labor knows no bounds.)

But despite their best efforts, May Day demonstrations in America are still going strong.  Much of it centers on the controversial Arizona  "Show your Papers" law today, as hundreds of thousands in cities and towns all across the country are scheduled to march in solidarity against immigration and worker abuses.

But even as I write this James Dobson, formerly of Focus on the Family, is leading  May Day, a Cry to God for a Nation in Distress on the steps of the Lincoln Memorial.  Dobson and others, including Tim Wildmon, president of the American Family Association,  are calling it a "day of repentance and remembrance",  addressing "The greatest moral crisis since the Civil War", which seems to include abortion, Obamacare, Obama in general, and the scary notion that there are more "Socialists" than Republicans running Congress these days.

The Liberty Council will be there, as well.  They wouldn't want to pass up a chance to sell  their membership cards: 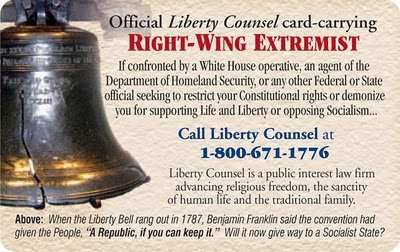 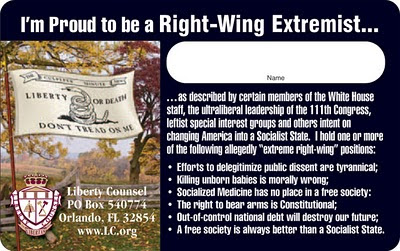 So.  May our efforts this May Day and every day forward bring peace and equity to those who break their backs struggling to build this nation.  Solidarity until the sun ceases to shine or until worker equity is a reality.  Whichever comes first.