Mr. Auctioneer: Saving Our Homes One by One


Yesterday there was a rally in front of the 22nd District Court in Inkster, Michigan, where foreclosure proceedings were being held.  The protesters were there to help save the home of Jerome Jackson, a paraplegic who moved into his wheelchair-accessible home in 2004 with the assistance of Community Living Services, a county-funded program that provided help with his mortgage payments.  When CLS dropped Jackson's funding in 2009, he fell behind on his payments and Fannie Mae eventually bought his mortgage at a foreclosure auction.  He was a man without a home, but he stayed put, hoping they could work it out and the house might someday be his again.

No amount of pleading could sway the steadfast bottom-liners from moving toward the day when Jerome Jackson would finally be evicted.  No addition funding came his way, even though he is handicapped and certainly qualifies.  Payment modification appears to have been out of the question.  The house now belongs to an entity given personhood by our Supreme Court without also having given it a heart.

A story told many times before, most often with a less-than-happy ending, but Jerome Jackson isn't fighting his battle against the Big Guys alone.  A loose coalition made up of UAW Local 600 and members of three local groups--Occupy Detroit, Moratorium Now, and People Before Banks--have taken up the cause and are responsible for organizing this rally (and others, as needed):


The banks were bailed out for their reckless profiteering
and fraudulent practices because they were “too big to fail.”
Jerome Jackson is “too human to discard.”

Whatever the outcome, let it be said that the people tried.

There was a time when we might have read this story and moved on, saddened by the prospect but generally acknowledging that--poor man--what's done is done.  We've been there, we've done that, over and over again.  What we're left with are numbers of foreclosures and evictions across the country so unbelievable it feels like something out of a depression-era novel.  What we're left with is a whole lot of suffering, the causes of which smack suspiciously of callous profiteering, alternately smacking of outright criminal cruelty.

Much of my own state, Michigan, is struggling with heavy foreclosure rates, but in Detroit the statistics are especially grim. Roger Bybee put it into perspective in his "In These Times" piece yesterday:


Abysmal poverty afflicts the city; 40,000 households have suffered water shutoffs. The specter of thousands of new home foreclosure stalks the city, threatening to push more Detroiters out of their homes on top of the 67,000 bank foreclosures—more than 20 percent of all household mortgages—that hit the city between 2005 and 2009 alone. The city already has an estimated 50,000 to 70,000 vacant homes. With the ongoing wave of foreclosures, home values have been plunging. Foreclosed homes sell for $38,000 in Wayne County and less than $11,000 in Detroit, according to RealtyTrac.

Bybee writes of a particular foreclosure effort that didn't follow the norm, thanks to the efforts of caring individuals joining together as a formidable coalition:


Labor educator Steve Babson, a leader of People Before Banks and author of Working Detroit, recounted a recent action that was “a scene straight out of Charles Dickens." An elderly African-American couple, with husband William legally blind, missed some mortgage payments to the New York Bank of Mellon Trust. In a sheriff’s sale, the bank bought the home for $12,000, meaning that the Garretts would have to move from their home of 22 years in the dead of winter.
At one point, Bertha Garrett thought that she had persuaded the bank to sell the home to the Garretts for the $12,000 that the couple had managed to scrape together. But then the bank backed out of the deal, insisting on a sale price of $24,000, far out of reach for the couple.


Usually, what happens next step in the foreclosure process is the arrival of a truck hauling a dumpster, with a crew ready to throw out a family’s belongings. But UAW 600 and its allies confronted the would-be eviction team with a tactic appropriate to the Motor City: cars and lots of them. The anti-foreclosure forces surrounded the Garretts’ home with dozens of cars, and the bank’s evictors were shut out. When the eviction squad called in the police, officers came to the scene but dismissed it as a “civil matter” and drove off. That left the anti-foreclosure forces still in command of the situation, and the evictors left the scene.
Meanwhile, some 40 protesters—about half from Local 600—picketed outside the Mellon bank to publicize its treatment of the Garretts. With the eviction foiled and the prospect of bad publicity growing, the Mellon bank relented and sold the Garretts’ home back to them for $12,000. 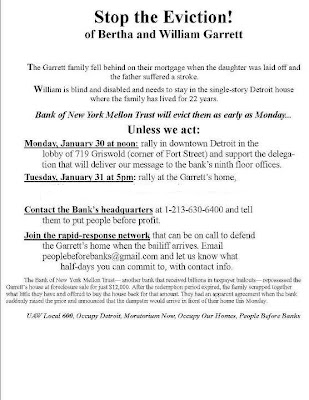 (NOTE:  No, I don't know how the Garretts came up with the needed $12,000.  I've anticipated that question from the folks who think all economic victims got that way on purpose, so here's my answer:  I'll bet my life that they weren't hiding it under their mattress, waiting to pull it out just in the nick of time, guaranteeing a rip-roaring miracle of a finish to what seemed in the early scenes like a real tragedy.  The point, you ninnies, is that the bank reneged on an agreement and asked for double the amount, just because they could.)

Attempts to stop foreclosure actions are taking place all over the country.  One particularly innovative way is to sing it.  This video is from a courtroom in New York, but the "Mr. Auctioneer" song is traveling fast and is now being sung in rallies and in foreclosure courts all across the nation.  (Rachel Maddow's take here.)

All the people here
Are asking you to stop all the sales right now
We’re going to survive, but we don’t know how


Is this just the start of something big?  Or is it already big?

It appears to be big.  People are gathering in organized protests in all corners of the country and the word "occupy" is taking on a whole new meaning.  It's not just about Wall Street anymore.  It's moved to our cities, our towns, our neighborhoods.  It's about where we live and how we live and who gets to decide.

Everywhere there are coalitions forming to combat the coalitions intent on keeping the Honkin' Big Bonanza going, but to see what's happening locally you need look no further than the nearest union hall.  Check out their websites.  You'll find deep and abiding involvement in helping members of their communities entrapped in an economy not of their doing and not of their choice.  (It's because they're unions, O dubious ones.  That's what unions do.)

Have you noticed that it's getting harder and harder to shame people whose only motivation is making tons, and I mean literally tons, of money?  They've played the blame-the-victim game for so long they've fine-tuned to perfection the pretense that keeping the über-wealthy happy means riches for us all.  Never mind that there hasn't been a single economic indicator in the history of our republic that proves their point. Never mind that we've been keeping the über-wealthy happy at our expense for decades now and all that has happened to make lives better is that the über-wealthy have become ecstatic to the point of permanent giddy.

People are suffering through no fault of their own.  Others are not only profiting from their suffering, they're doing everything they can to keep it that way.  Now we've taken it upon ourselves to do something about it.

Real people making real change.  And for the good.  It's just crazy enough to work.