What's so Funny about Rush Limbaugh?

As I write this my sense of humor is intact and waiting as always for something funny to happen.  I can get tickled at the least little thing--adorable babies and clumsy dogs and tripping on sidewalk cracks--and I can howl at even the worst, god-awful jokes.  I can't explain them and I've never been able to repeat them with any kind of comedic skill, but I know funny when I hear it.

I can say without even having to think about it that I've never laughed at a thing Rush Limbaugh has said or done.  I don't get him.  His performances are like those of a mean, out-of-control drunk who thinks everything coming out of his mouth is either hilarious or golden.  He begins every riff quietly, taking his time, pausing, letting his words sink in, and builds to an awesome, wiggly, crazed crescendo.  Oh, my God.  Electrifying to dittoheads and the uninitiated.  Wow!  But to those of us who have been exposed to his antics for decades, they're nothing more than the usual carefully calculated theatrics.  Ho hum.

That's what makes his latest rantings against a Georgetown University law student fighting her college's policies on insuring birth control aids so mystifying.  His initial comments about this young female student were so breathtaking in their vile putridity, the reactions against them were, at last,  refreshingly awesome and swift.  Hundreds of thousands of people protested his words.  Even his usual defenders could be seen slinking away from the ten-foot pole they wouldn't use to touch them.  Yes!  Limbaugh is a pariah!

So did he finally stop and think about what he had said and realize he'd overstepped?  The woman he so viciously word-raped was a young college student and not a politician or a public figure. She was not fair game and she was not a joke.  But no, he didn't.  He was so sure of his base, so sure of the politicians in his thrall, so sure that his advertisers would be too busy counting their money to notice, he came back the next day and the next and attacked this same young woman again.  This time he demanded videos of her sex acts.

His politicians, true to form, gave out some half-hearted hand smacks, reminding us that he's an entertainer, not a Republican spokesman--as if he's only pretending to be one because he'd slept at a Holiday Inn once.

At last count, seven of Rush's sponsors have dropped him, at least for the moment, until all the fuss dies down.  Dozens of petitions are still making the rounds, working to gain enough signatures to pressure all of his backers to leave him helpless and wiggling on his own.  It took all of that for Rush to give an inch and release an odd written statement that, considering who it is from and how rare those things are coming from him, some might take to be an apology.

March 03, 2012
For over 20 years, I have illustrated the absurd with absurdity, three hours a day, five days a week.  In this instance, I chose the wrong words in my analogy of the situation. I did not mean a personal attack on Ms. Fluke.
I think it is absolutely absurd that during these very serious political times, we are discussing personal sexual recreational activities before members of Congress. I personally do not agree that American citizens should pay for these social activities. What happened to personal responsibility and accountability? Where do we draw the line? If this is accepted as the norm, what will follow? Will we be debating if taxpayers should pay for new sneakers for all students that are interested in running to keep fit?  In my monologue, I posited that it is not our business whatsoever to know what is going on in anyone's bedroom nor do I think it is a topic that should reach a Presidential level.
My choice of words was not the best, and in the attempt to be humorous, I created a national stir. I sincerely apologize to Ms. Fluke for the insulting word choices.


"I did not mean a personal attack on Ms. Fluke."  Really?  How would you go about attacking someone for three solid days if you DID mean it?

In Rush Limbaugh's 24 years on the air he has apologized six times for the things he's said that backfired.   BuzzFeed has put them all together here.

In 1988 he called Amy Carter "The most unattractive presidential daughter in the history of the country", and "apologized".

In 1992 he called Chelsea Clinton "the White House dog" and "apologized", blaming his crew for confusing him by mixing up pictures of Chelsea and the Clinton's dog.

In 1996 he made fun of Michael J. Fox, saying he either didn't take his medication on purpose or he was faking it when he appeared in a commercial for Claire McCaskill.  In his "apology" he said, "All I'm saying is I've never seen him as he appears in that commercial. . ."

In 2008 he compared then-Senator Obama to Curious George and in his "apology", threatened to fire the caller who brought it up, ha ha, saying he never knew Curious George was--Gosh!--a monkey.

This is not to say that Rush has never said stupid, hateful, racist, misogynistic things before or since.  Oh, he has, and plenty.  That's apparently part of his appeal, God help us.

So think of it.  One of the wealthiest, most famous entertainers in America right now is a stupid, hateful, racist, misogynistic radio personality who broadcasts a show three hours a day, five days a week highlighting his own peculiar, insulting, disrespectful brand of humor.  Millions of seemingly sane listeners adore him and are honored to align themselves with him.

In many dark parts of our nation he is paid hundreds of thousands of dollars to deliver a one-hour speech to friendly packed houses, mirroring the stupid, hateful, racist, misogynistic rantings direct from his incredibly popular radio show. 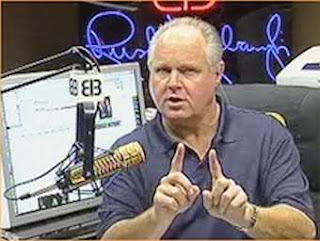 He is so successful, grown politicians fear him more than they loathe him and cannot bring themselves to denounce a man who, underneath all that bluster, is a weak-kneed coward.

He will not debate or answer to anyone.  His radio callers are screened so no one can ever dispute anything he says.  He won't make public appearances in places where people who disagree with him might be in attendance.  He has never appeared on a program where he might be asked hard questions.  He attacks women and children and the handicapped with impunity and laughs along with his audience at the outraged responses.

He is a monster in the eyes of most normal human beings, and so I ask this question in all seriousness:

What is so goddamned funny about Rush Limbaugh?


(Update, 3/8/12:  Media Matters reports that Limbaugh made disgusting comments about Sandra Fluke 46 times over three days and only apologized for two words.  They're listed here. Over 40 advertisers have retreated from his show. Sen. Carl Levin wants the Armed Forces Network to stop broadcasting Limbaugh's show to the troops.  Rush says it's all good.)
Posted by Ramona Grigg at 1:03:00 PM