Red States, White Popes, Blue-bloods: It is to Laugh

In almost every war, there are those moments when soldiers have to sit back and laugh at the absurdity of it all.  Think "Mash", "Stalag 17", "Catch-22", "Slaughterhouse Five".  Like that.  In the war of the Red States against American Women, while the scale may be worlds smaller, and while there's actually been no official declaration, the time has come.  To laugh, I mean.  Honest to God, it is to giggle.

Could even the wildest, zaniest futurist have predicted these hysterical days, when lawmakers in a dozen red states would be falling all over each other to see who could come up with the nuttiest demand to probe into the sex life of Femalus Americanus?

Pennsylvania governor Tom Corbett capped last week's antics, turning the usual Republican clown show into an Extravaganza de Burlesque with his lame punchline, "I don't know how you can make anyone watch. . .you just have to close your eyes",  after a reporter asked the Governor if state-sanctioned ultrasounds for women seeking abortions "went too far".

This clip from the Rachel Maddow Show shows the madness in a nutshell:

Visit msnbc.com for breaking news, world news, and news about the economy

ThinkProgress Health does another recap, this one with an interactive map showing the states that either are planning or already have hardline, punitive anti-abortion laws in place.  (Okay, this one isn't funny. . .not funny at all.)

But then there's Rick Santorum.  Rick Santorum is running for president, I guess you know.  But is he?   His speeches are sermons and his sweater-vests are the closest he could come to a cassock without drawing attention to his real hope for the presidency.  But listening to him pontificate, don't you just know he's itching to wave at the crowds from his Rickmobile and turn the White House into a papal palace, where he can do what every American president should have been doing all these many years, which is to work tirelessly at saving us sinners from ourselves?

What The Great Santorum doesn't seem to understand is that most of us don't want to go back to the Dark Ages.  Inquisitions are so yesterday.  Self-flagellation hurts.  And women might be ladies but they'll never be chattel again.

So, given that Rick Santorum can't stop showing his inquisitor's hand, in all likelihood Mitt Romney will be the Republican presidential candidate.  Mitt Romney can't help that he was born a blue-blood, but somebody needs to tell him his impression of Thurston Howell III is wearing thin.  It was funny at first--even hilariously funny--but verbal pratfalls from haughty billionaires have never a president made.

Blue-blood presidents, from Washington to Jefferson to Roosevelt to Kennedy,  at least pretended to be egalitarians.  Equality is what our constitution is all about.  The president, as leader of the country, is a representative for the people, not a bottom-line, for-profit CEO.  Maybe this Mitt Romney needs to go back to his Massachusetts governor roots. That Mitt Romney could at least, every once in a while, be convincing in his role as public servant. 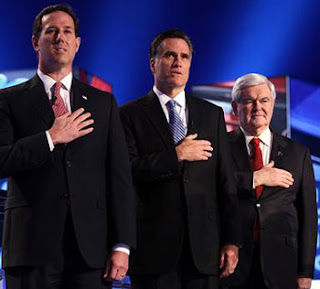 And Newt Gingrich.  Where is poor Newt?  As hard as he might try to insist otherwise, he's on the outside looking in.  Delusions of intellectual grandiosity failed to impress his peeps. They yawned and moved on.  Color him green.