Women of GOP Land: What do you see in those men?

Hello, women of the Republican Party:  Democratic female of the liberal persuasion here. I know it looks like we couldn't be any farther apart when it comes to ideology, but I know us. I know when it comes to the big issues--our futures and the well-being of the ones we love--we're sisters under the skin.

We should talk. I mean really talk. I don't mean the usual chit-chat, the talk about kids and work and what's for dinner. I mean about politics. When we're together we do everything we can to side-step the issue and it does keep us friendly, but you must have noticed that the upcoming presidential election is becoming the bull elephant in the room.

I know you won't want to hear this, and I hear you when you tell me it's none of my business, but for a couple of weeks now I've been especially worried about where you're going with the men in your life. It strikes not just me but a lot of us that the relationship is becoming, well--abusive.

At the moment these four men--Mitt Romney, Rick Santorum, Newt Gingrich and Ron Paul--are vying for your affections and from where I sit no matter which one you choose it'll be bad news for you. And, okay, if any one of them wins, it'll be bad for me too. But it's you who has to take control of the situation. When any one of the four tells you he's going to work hard to take away a woman's right to free birth control it's really disheartening for the rest of us to have to watch you applaud and cheer, as if he is God's gift and aren't you lucky to have him?

At least one of them, Rick Santorum (father of seven, no surprise) doesn't believe in birth control in any form. He says birth control can actually be "harmful to women", suggesting that it promotes sex outside of procreation, which apparently, even for those of us not still living in Medieval times, is a bad thing: 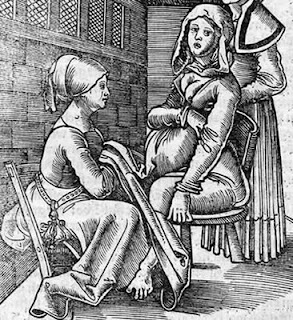 "One of the things I will talk about, that no president has talked about before, is I think the dangers of contraception in this country.... Many of the Christian faith have said, well, that's okay, contraception is okay. It's not okay. It's a license to do things in a sexual realm that is counter to how things are supposed to be."


He blames "radical feminists" for taking women out of the home and into the workplace, yet he's done nothing to help improve the economy enough so that women who want to stay home can stay home. In his book, "It Takes a Family: Conservatism and the Common Good," written in 2005, he wrote: "Sadly the propaganda campaign launched in the 1960s has taken root. The radical feminists succeeded in undermining the traditional family and convincing women that professional accomplishments are the key to happiness."

Ron Paul, a former OB/GYN and a Libertarian to boot, said, “Forcing private religious institutions to pay for contraception and sterilization as part of their health care plans is a direct assault on the First Amendment’s guarantee of religious liberty. On my first day as President, I will reverse this policy.”


'Employee rights are said to be valid when employers pressure employees into sexual activity. Why don’t they quit once the so-called harassment starts? Obviously the morals of the harasser cannot be defended, but how can the harassee escape some responsibility for the problem? Seeking protection under civil rights legislation is hardly acceptable."

Newt Gingrich believes strongly in a Personhood Amendment that says life begins at conception--a loony view with ramifications for everything from the Morning After pill to in vitro fertilization. In his bid to destroy Planned Parenthood he lied when he said the organization's main thrust was performing abortions. He went so far as to pull a fantastical number out of the air--90% of all services were abortions--when the truer number is three percent out of nearly 5 million visits a year.  In truth, only 34 percent of visits to Planned Parenthood are for reproductive services.


Mitt Romney wants to cut off contraceptive services at Community Centers as well, and if he had his druthers he would kill Planned Parenthood entirely. Even after all the evidence to the contrary, he is still trying to convince you that nothing good comes out of Planned Parenthood, when we all know that in so many communities they've become an essential health care lifeline, not just for women of reproductive age, but for men and women of all ages.

My question is, what is it you see in those men?  When you're out there applauding and encouraging men who want to take womanhood back to the status forced on us even as late as the middle of the 20th century, does it bother you even a little bit that you're egging them on, knowing--because they've told you in every way possible--they want to own every little piece of you?


(Cross-posted at dagblog, where the men outnumber us but they never try to outsmart us)
Posted by Ramona Grigg at 10:21:00 AM