Thank you, Cal Thomas. Mighty Big of You

I can't think of a time when I've ever agreed with Cal Thomas.  I confess I don't seek him out, but when I see him on an occasional Op-Ed page I'll read him just to see what he's going to say that's going to infuriate me.  I'm rarely disappointed.

So as he sat on a panel at this year's CPAC and said what he said about Rachel Maddow, I wasn't shocked.  He was at CPAC with his own peeps. It was cool. 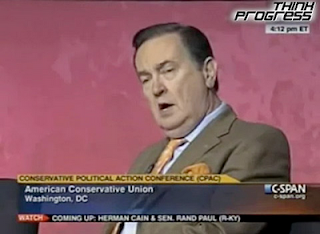 
During a panel at the conference, a clip of Maddow's appearance on Sunday's "Meet the Press" was played. In it, Maddow said that Republicans are "waging war on contraception."
"I'm really glad...that you played the Rachel Maddow clip," Thomas said after the audience booed a bit, "because I think that she is the best argument in favor of her parents using contraception." As the audience cheered, he continued, "I would be all for that and all the rest of the crowd at MSNBC too for that matter."

It did seem a little odd for a Pro-Life guy to be sort of wishing someone hadn't been born, but he was at CPAC, and it appears to be a whole different world in there.  But, as one might expect, it created a bit of a flap.  It didn't seem like such a much to me.  All kinds of goofy things came out of CPAC 2012 and were being reported hour by hour.  This was actually one of the milder ones.  But it took a new turn when fellow Conservative Greta van Susteren said publicly that Thomas owed Maddow an apology.  (Her commenters obviously didn't agree. Oy. And vey.)

Then last week Rachel announced that Cal Thomas had called her to apologize.  She told her audience, "I completely believe his apology.  I completely accept his apology."  Good.  Classy.

And that was that.  Until today, when I saw a column by Cal Thomas on the Op-Ed page with the headline, "Rachel Maddow and Civility".  I fully expected a diatribe against Rachel, even after his apology to her, but what I read may be the most sincere abject apology I've ever seen in my life.  That it came from a man who some people, including me, considered a tight-assed Right Wing hack, made it all the more amazing. [Note:  The full title of Thomas's piece is "Rachel maddow and my lesson in Civility" but our paper shortened the title to "Rachel Maddow and Civility" so that it could be read as something entirely different.]

In his column he wrote, "I was asked to be on a panel before what looked like a crowd of about 1,000 conservatives, hungry for "red meat."  He wrote that he "stupidly" said what he said "before thinking".

I'm reading between the lines here but what I'm getting is that a man like Cal Thomas, who began his column with, "When one writes about moral convictions, it's probably a good idea to consistently live up to them," could kick himself for ever getting involved with that CPAC crowd in the first place.  (It'll be interesting to see where he goes from here.)

He writes that since the flap he has watched a couple of Rachel's shows:


"Without engaging in any qualifiers, she is a strong and competent advocate for her position.  Why do so many of us only watch programs that reinforce what we already believe?  Where is the growth in that?  Whatever else she may or may not be, she is my fellow American.

I have many liberal friends acquired over the years.  They are impossible to avoid in the media, but I don't wish to avoid them.  They became my friends because I stopped seeing them as labels and began seeing them as persons with innate worth.  That is what I failed to do in my first response to Rachel Maddow. . .

. . .I expect to like Rachel Maddow because my instinct is to separate the value of a person from his or her political position.  For some strange reason (demon possession, perhaps) I failed to do that at CPAC."

Bravo, Mr. Thomas.  You will lose friends and followers over this, and it will probably be no comfort to you that I, as a liberal, completely believe your apology and appreciate what you've done here.  But none of that is important.  What is important is that the next morning you felt bad about what you had done and you "called Ms. Maddow to apologize. It wasn't one of those meaningless 'if I've offended anyone...' apologies; it was hearfelt."

And by doing that and writing about it publicly you've opened the doors for all of us to remember something we so easily forget when we're in the midst of doing battle with the people on "the other side":  Whatever else we may or may not be, we are fellow Americans.
Posted by Ramona Grigg at 1:16:00 PM