Newt Gingrich is obsessed with the plight of poor kids these days. He's been all over the place talking about them, and I have to confess, the jollier he gets about his remedies for their plight, the more nervous I become.  It's an odd turn of events and one rife with suspicion.  It's Newt we're talking about.  Newt, who eats mean for breakfast and swallows the seeds.

Newt, who put a contract out on an entire nation, namely ours, and is still fretting over the insistent existence of a labor movement that was scheduled to die circa Reagan.  (He's got another, bigger contract ready to roll on Day One.  Fair warning.)

And encores with the stirring, "For what is a man, what has he got?  If not himself, then he has naught. To say the things he truly feels and not the words of one who kneels.  The record shows I took the blows and did it my way!"

(Let the record show Newt has so far ignored the first lines of the above tune.  The part where it says, "And now the end is near and so I face the final curtain...".  Yesterday, in fact, Newt told ABC's Jake Tapper he WILL BE THE NOMINEE.  I guess that means all debates are off now?)

Ordinarily I wouldn't care about Newt's $60,000 per speech blabbings about stupid child labor laws and how really poor kids from really shiftless families will resort to stealing unless he steps in and puts them to work, but after some lengthy and intense investigation, I find I have barely an ounce of faith in this current century's sanity.  That dimpled nasty man could very well be running things come January, 2013. 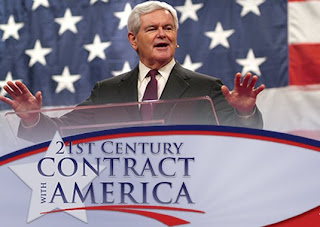 There are some who defend him by reminding us that there's nothing wrong with kids doing a little work. The kids feel good about themselves and the upside is that, as Newt says, they can buy their own ice cream someday.  Nice, really, that.  In a sane world we might actually picture our sweet darlings helping out and getting paid a tiny reward, leaving everybody happy, happy, happy.

I come around to this question. You have a very poor neighborhood. You have kids who are required under law to go to school. They have no money. They have no habit of work. What if you paid them part-time in the afternoon to sit at the clerical office and greet people when they come in? What if you paid them to work as the assistant librarian?  What if they became assistant janitors and their job was to mop the floor and clean the bathroom?”


That's not helpful, that's hateful.  And full of hidden meaning.  What does it mean when Newt says, "You have kids who are required under law to go to school"?  Will there be an addendum to Newt's 2ist Century Contract on America abolishing school attendance for "really poor kids" so they'll have more time to do all that rewarding work?

When the kids take over as assistant clerks and assistant librarians and assistant janitors, what does that do to the work hours of the real clerks, librarians and janitors?  I'm reading between the lines and seeing part time jobs with no bennies for everyone as part of Newt's grand plan.  He's Newt, after all, clearly not Mr. Empathy.  If you've followed Newt at all you know how strongly opposed he is to equality of the masses -- the kind of thing any signs of empathetic weakness might very well lead to.

Lots of kids work after school and weekends now, even amongst the "really poor".  It's what kids do when they get old enough.  They baby-sit, they do paper routes, they cut lawns, they wash cars, they run errands.  What they don't do any longer is work in sweatshops under conditions that could maim or kill or rot the spirit.

Any student of history will tell you the reason we aren't allowed to work kids like that any more is because the laboring masses organized and put a stop to the exploitation of children by the privileged few.  Newt the Historian seems to have forgotten that. But on to other things Newt, because, again, there's a mighty strangeness afoot:  The Great One told Sean Hannity over at Fox, apropos of nothing, that, "I helped lead the effort to defeat communism in the Congress.”

And, okay, I have to ask:  How many communists were there in congress?  Were they as hard on us as the teabaggers in congress today?  Can you give us a few tips on how to get rid of subversives?