After the Thanksgiving Day gluttony is over and after our teams have either won or lost (Our biggie between the Lions and the Packers went horribly awry for my loved ones, poor dears.) and after we've taken our tryptophan-induced naps, the next fun thing to think about, talk about or plan for is Black Friday, our annual Big Huge Shopping Extravaganza.  It's the day when primitive survival skills kick in and the absolutely-must-haves traditionally go nuts and stampede in scenes that make even NatGeo-watchers go "Wow!". 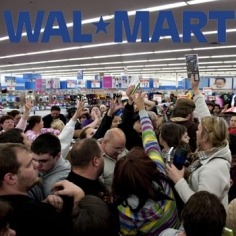 (Rumor has it that Black Friday is the one day of the year when China pays homage to US. They would make it a national holiday, except everyone is busy at work manufacturing things for our Christmas rush.)

There's a myth in this country that goes like this: America is broke.  Aside from a paltry few tax-evading King Midas wannabes, nobody else has anything much.  That's the story.

Our jobless, our homeless, our soup kitchens, our empty former homes, our overflowing ERs--that's all real.  Painfully real.  But what's also real is the hefty percentage of 99 Percenters who spread out at the stroke of Black Friday to go whole hog spending astonishing amounts of ready cash and pay-later credit on stuff.

It's an American tradition contrived and perpetuated by the merchant class and, really, who are we to tell people (other than Congress) how to spend their (our) money?  But a group known as "Occupy Black Friday" , an off-shoot of Occupy Wall Street, while admirably opposing the longer open hours which would take employees away from their own families on Thanksgiving, and endorsing the efforts to buy locally,  took it one step further and came up with the idea of boycotting, instead of occupying, the major chains on That Day.  (The Occupying part wouldn't work at all, you see, since millions of shoppers would already be camping out and milling around, waiting for the doors to open.)

Attempting to show the strength of the masses by boycotting major retailers on that all-important shopping day is one of those ideas that seems okay on the face of it, but which, in reality, is doomed from the start.  It's a whisper in the wind, a dusky dot in the night sky, and here's why:  I've been boycotting "Black Friday" for years now and nobody has ever noticed.  Multiply me by, say, several hundred thousand and we still wouldn't be noticed.  It's a happy tradition, the official start of the Christmas shopping season.  Even in the worst economic downturn in decades, it's still a force bigger than all of us.

Okay, granted, this year, for whatever reasons, it seemed more intense than fun.  A woman took to pepper-spraying other shoppers threatening to get too close to the prize she was after.  A man slipped a DVD under his shirt, not to steal it but to prevent it from being stolen from him, and got himself shoved to the ground and bloodied for his efforts. People were knocked around and bruised. There were grim reports of shootings and parking lot robberies.  But to the victors went the spoils and it's those success stories that make it all worthwhile.   (More to come the day after Christmas.  Another happy tradition.)

As might be expected, the activities at "Occupy Black Friday" came to the attention of the folks over at Fox "News" .  Their idea of the perfect smack-down was to tell people to go out and shop 'til they drop.  That'll show those damned Occupiers.  Hah!

Now, I really hate to think Fox had that much influence, but this year Black Friday alone took in $11.4 billion, a 6.6% increase over last year, while the Thanksgiving weekend broke all sales records with a staggering $52.4 billion spent over four days.  It was a jump of 16% over last year's sales, with record numbers of shoppers spending even more bucks on average.

No stats yet on the sales outcomes of Small Business Saturday, a truly sensational idea, even if it did come from American Express.

Today is Cyber Monday (designated by the online merchants who felt left out, no doubt), the lead-in to Cyber Week (Because why stop the momentum of a very good thing?), and on to Christmas, the Big Kahuna of cash heavy, gift-giving holidays.

So about that whole "America is broke" business.  We're looking into it.  We'll have to get back to you on that.