We were all a-twitter last week by the big news that a close-up photo of a suggestive section of a pair of gray jockey shorts was sent to a young follower from Rep. Anthony Weiner's Twitter page.  Weiner denies sending the Tweet but seems reluctant to answer the question:  Boxers or briefs?  Yours or Andrew Breitbart's?  Weiner jokes abound.  Weiner snarls.  The Right Wing breaks out the champagne, pours it over Breitbart's head.  Yee Haw!  Done and DONE!

Sarah Palin's Magical Mystery Bus Tour:   What's it all about?  She has a pizza date with Donald Trump.  The press goes wild!  (and so does Jon Stewart).  She crashes Mitt Romney's presidential bid party in New Hampshire and pooh-poohs it with "just a coincidence" in signature sweet-sticky-Sarahness.  Stephen Colbert explains it all.

Addendum:  With emphasis on the "dumb":  Palin giving a history lesson about Paul Revere's ride.  Can we please stop pretending this person is a grown-up ready to be president?  My God.  We're talking about the presidency.  Of the United States.  It's not funny!!   (Click here.)

New Jersey governor Chris Christie took a government-owned helicopter to his son's baseball game last week -- the same Christius Rex who spends his throne time figuring out ways to slash funding going to poor people with their own ball-playing kids -- and got haughty-hot when confronted with the fact that there might be the slightest impropriety there.  Come on, people!  With all they do in his family ("family values"), there's no way they could do it all with just a car!

(Note to Gov's son:  In the future you might want to hide the team schedule and avoid all the fuss.  Any dad who arrives at his son's game in a government-issue helicopter isn't there to watch his son play ball, anyway.)

Now, I really like Missouri.  It's a beautiful state.  The greatest father-in-law in the entire world (mine) was from there.  And from the looks of things, they've got a pretty progressive governor --  though his bio page works hard at keeping secret his party affiliation.  I had to work a bit to glean from clues that he must be a Democrat.  (His name is Jay Nixon. He won, anyway.)  So I do hesitate to even bring this embarrassing episode to light, but what is one to do when a story like this presents itself? Especially when it comes from the "Show Me" state?

Police in Independence got a call that a huge alligator was seen in the woods.  They don't get many calls about alligators in Missouri, but when you live in the "Show Me" state, you check out everything.  And sure enough, when they got there, there was indeed a huge alligator lying on the ground.  Here's the story:

INDEPENDENCE, Mo. -- Police responding to an alligator sighting in a suburban Kansas City pond took quick action to dispatch the big reptile. It wasn't until after the second rifle shot bounced off the beast Sunday that the three Independence officers realized it was a concrete lawn ornament. Independence police spokesman Tom Gentry said the department received a call from a man who said a gator had been spotted in the woods. Gentry said the alligator was in the weeds near a tree by a pond and it looked real. An officer shot the gator twice in the head -- per instructions from a conservation officer -- before realizing it wasn't moving. Gentry said the landowner told officers he put the fake gator there to keep children off his property.

I couldn't find a picture of the actual alligator in question, but for future reference, here's a photo I took of a couple of real alligators: 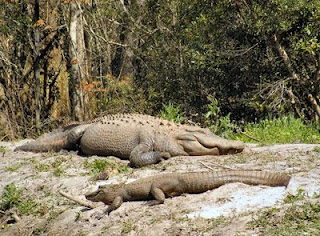 In Michigan, where they drastically slashed public education funds but left prison funding alone, the Ithaca, MI school superintendent had an idea.:

Consider the life of a Michigan prisoner. They get three square meals a day. Access to free health care. Internet. Cable television. Access to a library. A weight room. Computer lab. They can earn a degree. A roof over their heads. Clothing. Everything we just listed we DO NOT provide to our school children. This is why I’m proposing to make my school a prison.

See?  All it takes is a little imagination.  We can do this! 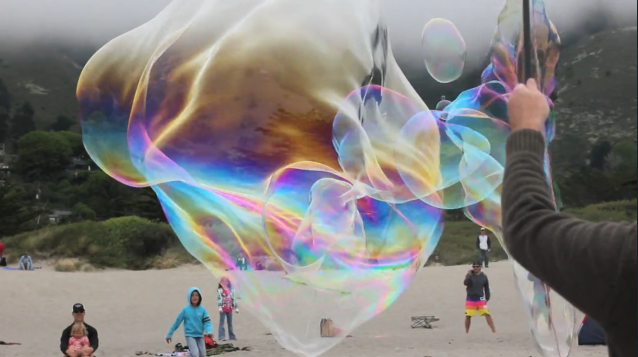