Sarah Palin knows her history.  It's our history that throws her.  Go ahead and laugh if you want to. Sarah still says Paul Revere was warning the British, and if you can't figure out why, it's your problem not hers.  People who like her (or maybe it was people whose bread she butters) even tried to change the Revere story on Wikipedia to more closely reflect Palin's version.  It didn't happen, but it doesn't matter.  She's just so darned cute, idn't she? Golly.

Is Donald Trump still thinking of running for president?  Or is he setting his sights even higher?  Here's his latest warning:

“I am watching very carefully. If the wrong person is nominated you watch what happens with Donald Trump and what he does, because we have to beat Obama. This country cannot last any longer with Obama as our president.”

I don't know.  Here's another goofball we like to laugh at, but sometimes while we're laughing larger forces are at work and we end up having to turn that smile upside down.  Last Week Jonathan Turley wrote about third-person Donald's actions in far-off Caledonia, where he's building a huge golf course complex:

In Scotland, Trump is bullying a Scottish couple who have had the temerity to refuse to surrender their home to his development. Trump is reportedly not only seeking governmental order to acquire the land but he encircled the home with a fence and then charged the couple with half of its cost — hitting David Milne, 46, and his wife Moira with a bill for £2820 for a fence they do not want.

So when Trump says he's not running for president but he's going to do something drastic if Obama wins again, doesn't that sound like a threat?  What could he mean?  Shouldn't we be pressing him for more details?  I mean, it's not like he's going to clam up over one little question. 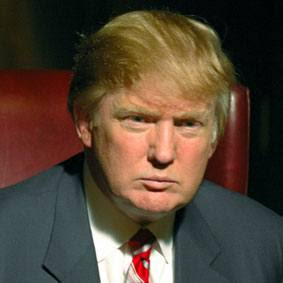 Hey you kids!  Republicans in charge here.  Just go home.  Now!  Student representatives in Iowa got a chance to go before the state education appropriations committee last week to put in their two cents about rising education costs.  This is what they heard from Shawn Hamerlinck, the ranking Republican on the committee:

“I do not like it when students actually come here and lobby me for funds. That’s just my opinion. I want to wish you guys the best. I want you to go home and graduate. But this political theater, leave the circus to us OK? Go home and enjoy yourselves. I want to thank you for joining us and though I have to concede, your time speaking before us is kind of a tad intense. It’s probably a pretty new experience. You probably prepared for it for days and you sat there in front of us trying to make sure your remarks were just right, and that’s a good thing. But actually spending your time worrying about what we’re doing up here, I don’t want you to do that. Go back home. Thanks guys.”

(Thanks to Eclectablog, where I first found the story.)

Another Weiner speaks out:  It ain't funny.   Writer Eric Weiner has had enough of the jokes at his expense.  He may not be an Anthony but he's still a Weiner:


The truth is I don’t know how to feel about my namesake, caught recently with his pants (nearly) down. On the one hand, as a fellow Weiner, I feel his pain. On the other hand, he has given us Weiners a bad name, and let’s face it: we didn’t have a great one to begin with.

Pringles inventor Fredric Baur is canned for the last time.  Time reports that Baur's ashes were poured into two Pringles canisters and buried.  Much thought went into which flavor canister would be most appropriate, but in the end the Original won out.  (Good choice.  What else, actually?)

Moment of Sublime:  Yesterday Google paid tribute to Les Paul on what would have been his 96th birthday by creating a guitar-like instrument that plays notes when you mouse over the strings.  Once a tune had been created, it could then be recorded and sent to Google.  It was so popular, they're leaving it up through today.  I watched Rachel Maddow plunk it and play last night, but when I try it I don't get any sound.  I can move the strings and they color up, but they won't sing to me. (The computer hates me and it always has.  I'm too much in love with it to give it up now, but this relationship borders on SM and that's just crazy.  But never mind my little rant here.  The point is, I've lost any chance at being a published composer, an achievement I didn't even know I wanted, but now it seems I desperately do.)